Our 12 things to do in Michigan in March 2022 focus on food, flutters and frivolity.

One of the most welcome signs of spring returns. The conservatory at Meijer Gardens heats up to welcome butterflies and winter-weary guests. You’ll feel like you’re in Florida with 85-degree temps and 70% humidity. Better yet, you can experience mini miracles as these fluttery creatures emerge into the world. Over 7,000 tropical butterflies representing 60 different species await you at the annual Fred & Dorothy Fichter Butterflies Are Blooming exhibition. These mystical little beings fly freely. They may even land on you to spend some quality time.

The perfect complement to late season skiing, Harbor Springs invites guests to get to know the local culinary scene with its own twist on Restaurant Week. Enjoy special menus at each of twelve participating eateries including Crow’s Nest, One Thirty Eight Cocktail Lounge, and Stafford’s Pier. Work up an appetite on the slopes then fill up and warm up in town.

If you love the art of dance, then this is a must attend event. This year’s event will feature the work of over 50 dance makers from all over the world. There will be four different in-theater live performances: one evening-length work presented by this year’s selected RADicle Residency Artist, Helanius J. Wilkins, two different professional short works performances, and a youth concert on Sunday. Performances will be available to both an in-person audience and a world-wide live-streamed virtual audience. Dance students will enjoy up to eight different master classes and workshops taught by visiting artists offered in hybrid format: face to face and virtual. There will also be an immersive movement installation by Kelsey Paschich, which will run asynchronously throughout the duration of the festival.

Head to LowellArts to check out work selected for the 36th Annual West Michigan Art Competition. The exhibit features outstanding artwork by Lower West Michigan artists who reside in a 25-county region. Artwork in any visual art media may be submitted by artists who are at least 18 years of age. This year’s distinguished juror is Bill Davis, a professor at Western Michigan University’s Gwen Frostic School of Art, where he teaches photography. Five cash awards totaling $2500 will be awarded. The gallery is open to visitors Tue-Fri 10am-6pm and Saturdays 10am-5pm.

Heading to the U.P. to enjoy the start of the thaw? You can explore waterfalls by day, then explore the peninsula’s culinary capitol during Marquette’s annual restaurant week for deals on great eats. Participating Downtown Marquette restaurants will offer special deals all week long. Grab a burger. Try come chicken fried cauliflower. Warm up with Pho or really heat things up with Cajun Cabonara. Of course, there’s also Lake Superior Whitefish to enjoy. Check out the website for participating eateries and to view the deals.

Michigan-created art will take center stage in Muskegon this month. The first annual Michigan Makers Market runs from 9am – 5pm on March 12. The event is slated to feature over eighty craft and fine art exhibitors. This winter market takes place at the VanDyk Mortgage Convention Center in the heart of Downtown Muskegon. Admission is $5 online or at the door. While downtown, consider quenching your thirst at Pigeon Hill Brewing or 18th Amendment Spirits.

For a decade folks have been traveling to Jackson to once a year for a chance to sample a wide range of tasty brews. The event will be held inside the American 1 Event Center with food trucks, games, fire pits and activities held out on the patio. It will showcase over 150 craft beers, ciders, meads and wines along with tasty grub like pizza, burgers, brats, and BBQ. General admission is $30 in advance or $35 at the door and includes ten tasting tokens. The event runs 12pm-5pm. 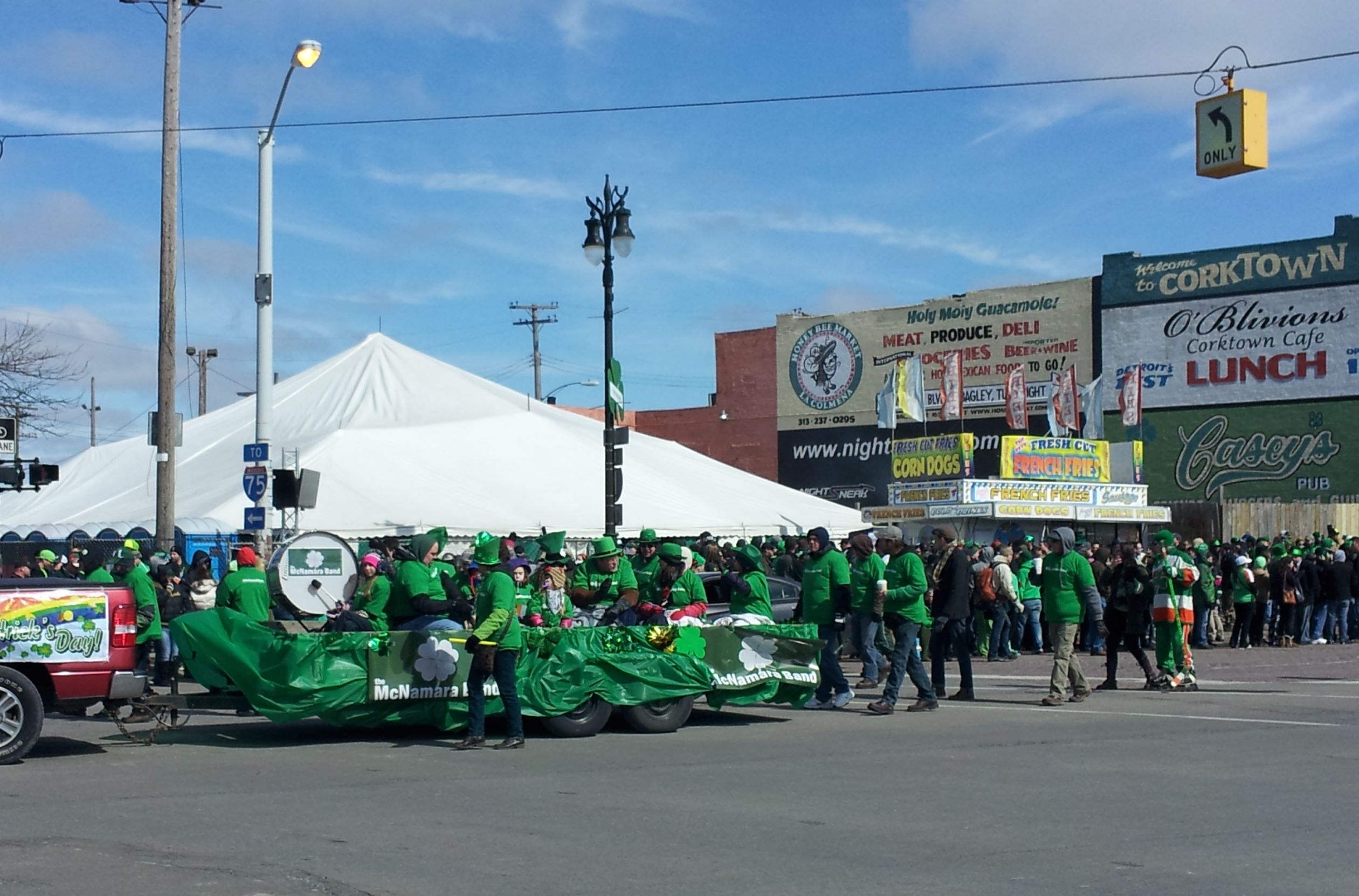 Corktown is the Motor City’s oldest neighborhood. After the opening of the Erie Canal in 1825, immigrants began arriving in Detroit in significant numbers. As the number of Irish immigrants fleeing the Great Irish Potato Famine of the 1840s increased, they began to move west of downtown Detroit into the area now known as Corktown. It was named after County Cork, Ireland. By the early 1850s, it is estimated that half of the residents of the 8th Ward, which contained Corktown, were of Irish descent. That’s what makes this neighborhood an ideal place to celebrate St. Patrick’s Day, almost any time this month. In particular, after a 2-year Covid hiatus, the parade is back. Traditionally held the Sunday before St. Patrick’s Day, this year’s event takes place on March 13. Wear your green and bring your appetite. Corktown bars and eateries will be pulling out all the stops. The parade kicks off at 1pm.

If you really want to soak up the luck of the Irish, or at least more than a wee bit o’ fun, head the intersection of US-10 and US-127. There you will find the town of Clare, which is steeped in Irish tradition. So much so, that it celebrates St. Patrick for nearly a week. This year marks the 47th such celebration which includes a parade, road race, recipe contest, pet photo competition, bed races, craft show, leprechaun contest and lots of food and eats. Be sure to stop into the world famous Cops & Doughnuts for a sweet treat while in town.

Let’s face it, after the past couple of years, and with all that’s happening in the world, we could all use some good laughs. Lucky for us, after being virtual in 2021, the nation’s first-ever community-wide festival of laughter, Gilda’s LaughFest, is returning in person this month. This festwill feature nearly 50 events, with something for all ages. Scheduled performances include Clean Comedy Showcase, Maria Bamford, Fortune Feimester, Charlie Berens, and Tone Bell. In addition to headlining acts, there will be free events such as Seriously Funny Adventure Challenge, Sunday Night Funnies, Kids Joke, Family Improv, You Have Two Minutes: Brian Kelly’s Favorite LaughFest Portraits, Laughter Yoga, Recovery Showcase, All Ya’ll Showcase, Drum it Out, and more. Head to Grand Rapids and get your giggle on.

Though it may come as a surprise to those not native to our state, skiing in shorts is a right of passage for Michiganders as spring returns. Some ski in shorts, some in costume, and some in traditional winter gear. Whatever your wardrobe preference, hitting the slopes for Winter Carnival, sometimes known as Crazy Daze, Will make you feel like a kid again. The adult-oriented weekend at Boyne Mountain features dancing, drinking, dining, and daring to skim the pond in the annual Slush Cup.

Pancakes are calling out for maple syrup, and every spring, this state answers magnificently. There are lots of events around the state providing ample chances to get your maple fix, though this family-owned sugarbush offers some unique elements. You can see maple syrup being made in a modern style sugarhouse, and also watch a re-enactment of how a French Colonial family would have made maple syrup and sugar. The weekend of the 26-27 also includes a Civil War encampment. Take a free tour of the sugarhouse. Devour a pancake breakfast. Kids will love the coloring contest, petting farm, puppet show, and other activities. While there, of course, stock up on lots of scrumptious maple products. If you can’t make this maple event, there are plenty others from which to choose into April.

Join us on social media for ongoing discussions about Michigan travel destinations. Tweet @BuyMichiganNow or tag us in a picture on Instagram when you make it to one of our 12 things to do in Michigan in March 2022. For next month’s event highlights, or to get ideas for your local bucket list, be sure to visit our Michigan Tourism page regularly.