One of my favorite parts of traveling is the surprising find. It usually comes in the form of a hidden gem on a road trip, when you see something intriguing and bother to take the time to stop. Such is the case with the Historic Bridge Park in Calhoun County near Battle Creek, Michigan.

I’ve passed the tiny brown road sign mentioning the park a gazillion times, but it seems like I was always in a hurry to get somewhere. One small upside to our pandemic-induced slowdown is that it’s been easier to just take a drive in a random direction, and make whatever stops pique one’s interest along the way. On one recent occasion that meant a pop into this unusual park, which is part garden, part wilderness, and part open air museum.

Take a quick jaunt off the highway and suddenly you can step back in time into this odd graveyard of sorts filled with different old bridges. It begins right away as you drive beneath a flamboyant red metal structure from Ionia County, circa 1886.

Park visitors are welcome to walk across and bridges to take in their majesty or a view.

Truss metal bridges from around the state, whose use as a passageway for transportation has expired, have been moved here to rest. The park is also home to Dixon’s Bridge, a historic stone arch railroad overpass. It’s a very peaceful spot, sans one little detail. In the background there is a constant white noise brought about by the nearby freeway traffic. Though it may change the tone of a typical hike, it seems aptly-suited for the resting place of these retired traffic servants.

The original restoration of the bridges was overseen by welding and steel fabrication expert Vern Mesler, who already had a number of truss bridge restoration projects under his belt. Throughout the project, an effort was made to maintain as much of the original bridge material as possible, exactly replicating any parts that required replacement. For example, failed rivets on the bridges were still replaced with rivets, as opposed to modern bolts. Each structure is its own unique piece of art, so it’s a delight that they ended up here, rather than in a scrap heap somewhere.

There’s no telling what storied moments these bridges witnessed during their time on duty, but they did endure one historic moment together. Back in 2010, a broken Enbridge pipeline dumped more than 800 thousand gallons of crude oil into the Kalamazoo River, which winds by the park. Cleanup took nearly two years. 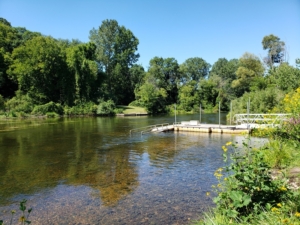 This canoe and kayak launch area in Dickinson Creek is one of the park’s newer amenities.

When the park finally reopened on June 5, 2012, there were some new amenities. As part of a community restitution effort, Enbridge paid for improvements to Historic Bridge Park that included improved restroom facilities, parking lots, and a new playground. There is also a canoe and kayak launch for easy access to the waterways. The park can be found at 14930 9 Mile Road in Emmett Township.

If you’re looking for an even bigger outdoor adventure while in the area, head up the road a few miles to Ott Biological Preserve. It’s accessible by foot or bike and is a magnificent area to get some exercise and search for wildlife. Home to over five miles of trails including portions of the North Country Trail, Calhoun County Trail, Iron Belle Trail, and Great Lake to Lake Trail, this gem offers plenty of hiking and biking opportunities. The Calhoun County Trail traverses the outer edge of the preserve and is a great route for bikers. Other trails meander through the middle of Ott and navigate the park’s wetlands and eskers and therefore only allow foot traffic.

Whether you’ve worked up a big appetite exploring Ott, or just want extend your day with some additional leisure, be sure to stop into nearby Battle Creek as well. Handmap Brewing is relative newcomer to the scene. Rumor has it the Cereal City-based brewery makes a Froot Loops-flavored beer called Two Can Mash, and 4-packs of the whimsical brew sold out within twenty minutes at the brewery opening in May of this year.

For a more traditional dining experience, and if you want to continue the old transportation theme started at Historic Bridge Park, make a visit to Clara’s on the River. Converted from the Michigan Central Railroad Depot, which was built in 1888, this well-known eatery preserves its legendary past.  There are two signed Bradley Hubbard brass lanterns hanging in the foyer, which were part of the Depot’s original decor. A nearby display case even holds many of the first cereal boxes ever printed in Battle Creek. The Tower Room, illuminated by a backlit stained-glass ceiling, was originally the ticket agent’s office. This room is where you will find railroad memorabilia, the restored ticket counter, and a hand-carved floor lamp brought back from abroad by Mr. and Mrs. Post—as in Post Cereal, which got its start in Battle Creek a few years earlier than Kellogg’s.