It’s hard to believe that something that happened over ten thousand years ago, could have a significant affect on the economy today, but that is absolutely true in the case of what is now known as the state known as Michigan. While it is difficult to imagine now, Michigan was once buried beneath ice that was nearly a mile deep. During the glacial period, snow accumulated up to thousands of feet thick. The bottom parts of these snow piles turned to ice, and flowed as glaciers. Gravity, along with the pressure from the weight, caused glaciers to creep across the landscape, eroding bedrock as they moved. Rock and soil from Canada was eventually dragged to the southern Great Lakes region and deposited here as glacial sediment.

The glacial events that shaped Michigan left an abundance of natural resources like fertile soil, mineral deposits, and the most obvious of all, which is water. Michigan has more freshwater coastline than any other state, as its bordered by four of the five Great Lakes. Inland, there is also a seemingly endless number of ponds, streams, rivers, and lakes as well. In fact, it is said that you can’t travel more than six miles in any direction within the state of Michigan and not hit a body of water. These resources made it habitable for animals and humans.

Long before any European settlers found their way, the abundant water provided a lifeline for native peoples like the Huron, Menominee, Chippewa, Potawatomi, Kickapoo, Miami, Noquet, Ottawa and Fox tribes. Archaeological evidence suggests that the first inhabitants stayed in small temporary camps as early as 6300 B.C. Those living here 600 to 900 years ago farmed and had more permanent villages, frequently along riverbanks and lakeshores. In the absence of a currency-based economy, growing and searching for food were critical to everyone’s survival. Settling along water attracted mammals, in addition to fish, and provided water to help nourish plants.

The Great Lakes and the inland rivers and streams also made it possible for European explorers and missionaries to move around the future state when they first arrived, creating settlements, churches, and forts, while establishing a fur-based economy. 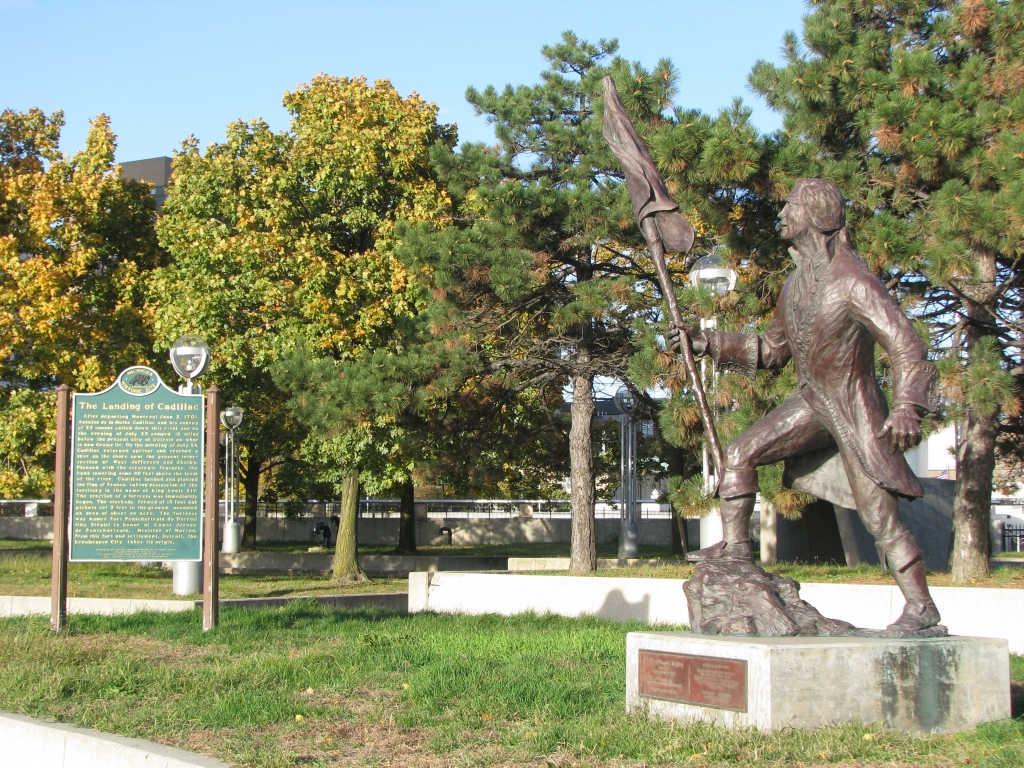 Fur Trade
The Frenchman Étienne Brûlé was the first European to discover Lake Superior around 1622. Others would following during the 1650s and 1660s, especially fur traders like Pierre-Esprit Radisson and and his brother-in-law Médard des Groseilliers. The French explorers had been looking for a shortcut across North America. Instead, they found an abundance of fur-bearing animals whose pelts could be made into hats in Europe.

The Great Lakes fur trade was a barter system between Europeans and Native Americans. The Europeans offered blankets, guns, hatchets, knives, needles, liquor, and metal cooking pots. In exchange, the Native Americans provided pelts, the most popular which was the beaver. Beaver hats were so popular that the animal had been hunted into extinction in Europe, so the new supply was incredibly valuable.

As the fur trade pushed farther into the interior of North America, permanent trading posts were built. One of the biggest fur-trading posts was at the Straits of Mackinac. In the late fall and early winter, Native Americans trapped the animals. In the spring, fur traders left Montreal and headed west to Mackinac, where they would haggle with Native Americans over the value of the pelts. Once a deal was completed, pelts were exchanged for trade goods.

By the early 1700s Antoine de la Mothe Cadillac hatched a plan to move the fur trade center south from Michilimackinac. Cadillac’s plan was approved by Count Jérôme de Pontchartrain. After departing from Montreal on June 5, 1701, Cadillac and his convoy of twenty-five canoes sailed down what would later become known as the Detroit River. On the evening of July 23, he and his party camped sixteen miles below the present city of Detroit on what is now Grosse Ile. The next morning they returned upriver and reached a spot on the shore near the present intersection of West Jefferson and Shelby.

Pleased with the strategic features, the bank towering some forty feet above the level of the river, Cadillac landed and planted the flag of France, taking possession of the territory in the name of King Louis XIV. They immediately began erecting a fortress, which Cadillac named Fort Pontchartrain du Detroit. It is from this fort and settlement that modern day Detroit takes its origin.

By the end of the 18th century, fishing and fur trading were booming. Farming had also become far more prevalent. The next century would bring new elements to the territory’s evolving economy. Within 250 years fur-laden canoes would gave way to huge boats carrying ore and grain to the world.