Ford returns the movie star Mustang to the public eye

Movie fans and car aficionados often unite when it comes to their feelings about a certain Highland Green 1968 Ford Mustang GT fastback. The car was driven by Steve McQueen in what many consider the greatest car chase scene in movie history through the streets of San Francisco in Bullitt.

Back then cars that appeared in movies didn’t have the same apparent cache as they do now, but over the years a mystery began to grow over what happened to the original “Bullitt.” For decades, very few people knew what happened to the movie star car, and it became the subject of much speculation and banter, especially among die-hard Mustang fans. Fans of the television show, Blue Bloods, even wondered if CBS had uncovered the vehicle when it was the subject of an entire episode, but replicas had been used. Now, at long last, the wait is over and the car can be seen again.

In conjunction with the release of the 2019 Mustang Bullitt and the 50th anniversary of the movie that inspired it, the original car, along with its new generation cousins, will be on display at the North American International Auto Show at Cobo Center in Detroit, January 13-28, 2018.

This is the third time Ford has made a Mustang in homage to the Bullitt. This one produces at least 15 horsepower more than a standard Mustang GT. The 2019 Mustang Bullitt will come exclusively with a 6-speed manual transmission managed by a white cue ball shift knob. It will be offered primarily in dark green, like the 1968 movie car. It is mostly unadorned with tasteful chrome accents around a black grille. Other accents include torque thrust 19-inch wheels, and a fake gas cap with a Bullitt logo. Inside there’s green stitching on the seats, door panels, and dash. If you want to see how closely the new version resembles the first, you can view them side by side at the show. 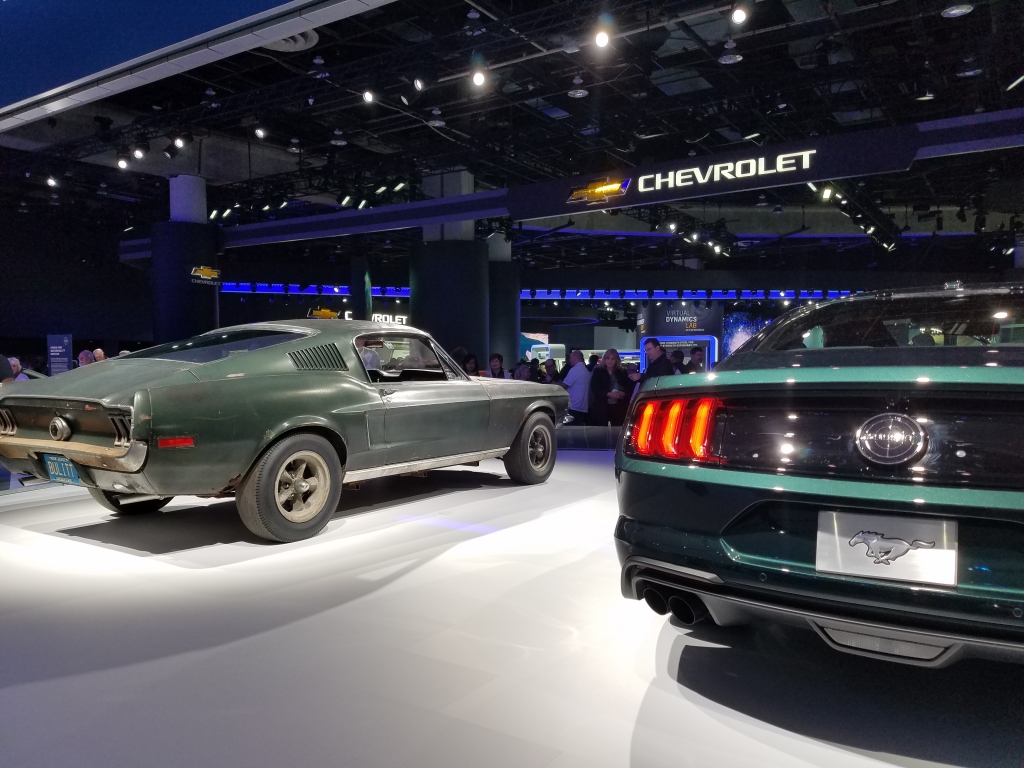 What Happened to the Bullitt?

That raises the question, where has the original Bullitt been all these years? The mystery may have added as much to the allure of the vehicle as the original car chase. It turns out it spent many of its years driving a teacher to work or sitting untouched in a garage.

The car’s current owner, Sean Kiernan along with his now departed father, Bob, had been its caretakers.  Bob Kiernan purchased it in 1974 from an ad in Road & Track. He was looking to replace the family car. Reportedly, he liked the idea that this Mustang had once been used in a movie. Sean’s mother, a schoolteacher, drove it for about five years. It developed clutch trouble in 1980, a year before Sean was born.

The car then sat in the garage throughout Sean’s young life as an unfinished project to be shared between father and son. With the advent of the internet, rumors began to fly about where the car was. Bob decided he would unveil the car to the world, and then give it to his son. They began work on the restoration project, but Bob fell ill. He passed away in 2014, and the car remained in a garage awaiting its future.

It is hard to believe that it eventually ended up making its way to a grand stage like the auto show in Detroit. There, it is being presented by Ford and Steve McQueen’s own granddaughter. McQueen had at one time contacted Bob via mail, attempting to buy back the Mustang he loved. Now, it will reappear for fans, next to the 2019 Mustang Bullitt.

Fate had intervened. Sean had a casual conversation with his boss one day about the cars Bob had left him. There was a ’75 Porsche 911 in addition to the Mustang. His boss reportedly seemed very interested in the Mustang, asked what color it was, and then remarked that it sounded like the Bullitt car.

It turned out that Sean’s boss, Casey Wallace, had co-authored a related screenplay. The premise revolved around two guys discovering the missing Bullitt Mustang in a garage. He revealed that to Sean, who was inspired for the first time to reveal his family secret. From there the pair included Wallace’s writing partner, Ken Horstmann, in on the surprising revelation. Experts were contacted, nondisclosures signed, and the vehicle’s identity was verified.

Eventually the right team of people were brought together to authenticate the vehicle, get Ford involved, transport it to a secret location, and now it’s on display in Detroit to the delight of car aficionados and movie buffs alike.