A history of Mackinac ferries

Ask most anyone in Michigan what the number one tourist destination in the state is and they’ll likely answer “Mackinac Island.”  The Straits of Mackinac and surrounding areas are beautiful no matter the time of year. It’s been a popular place to travel since humans inhabited the Great Lakes region. The mainland northwest of the island, St. Ignace, was the first established city in the state. The mainland south was home to Michilimackinac. The fur-trading post-turned fort was popular from its founding in 1715 until 1782. Then the buildings were moved to the island by the British army. They believed it would be a better-defended position. The island continued to flourish, leading to this history of Mackinac Ferries.

With such a popular destination, how were visitors able to cross the five miles to this tiny island? Up until 1878, they had to find and pay a local willing to transport them. Originally it was in birch bark canoes, then in other larger private vessels. As I spent the weekend in Conklin Park, near the Mackinaw City marinas, I often heard the horn of the ferries. I wondered about their specific history. Riding these boats is often considered an exciting part of the destination in and of itself.

In 1878, George T. Arnold and LB Coats began the first commercial ferry service for visitors to the island. Arnold was already a fairly successful man. He was born downstate in Allegan county on a farm near Plainwell, on July 12, 1846. In 1860 he and his brother, Levi, began managing the family farm. George later moved to Saugatuck. There, he kept books for a mill, and later secured a position in the Stockbridge and Johnson stores. He was eventually appointed as the postmaster. He continued that service for six years.

Arnold married Miss Susan Breuckman, daughter of a pioneer, and the two moved to the straits area. He was a promoter of the fishing business on Mackinac Island and. He teamed up with LB Coats, and bought the boat that would be the first in his historic fleet.

The two men named their company Arnold and Coats Ferry line. It eventually grew into Arnold Mackinac Island Ferry Company. They incurred a lot of business with the growth of summer visitors to the island. This was especially true with the opening of the Grand Hotel in 1910. The first Arnold ferries were coal-fire steamboats and did not just service the straits area. They traveled to various Michigan ports and islands.

A Woman Takes Over

After the death of George Arnold in 1921, his wife, Susan, began managing the company.  She was well-known in the area for her philanthropy, including her interest in the church work of Trinity Episcopal Church, and her charitable goodness to the poor. She quickly appointed Otto W. Lang as her chief executive and active assistant. Later that year, she sold the line to Prentiss Brown, who kept Lang on. 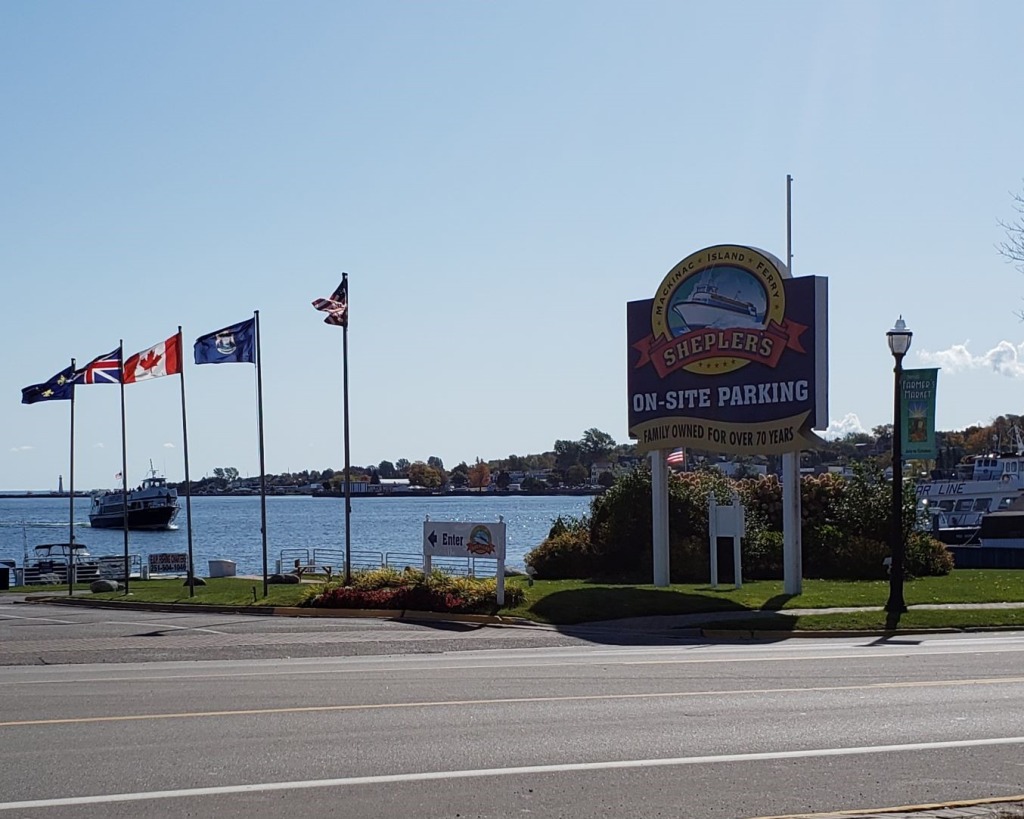 The end of World War II created an increase in passenger traffic to the island and the growing number of tourists was sufficient to support a second business. War veteran William H. Shepler returned home to Mackinaw from serving in Europe and started a snack bar for passengers waiting for the existing ferries. He felt there was a need for a ferry service that offered what he called “distinctive service and class”. Shepler’s charter service flourished. He had the opportunity to buy another boat and add his son, Bill Jr. as a pilot.

The competition was good for all involved, especially the tourists. Both ferry services were forced to innovate and Arnold developed faster and more efficient boats that were powered by diesel fuel. They could cross to the island in 30-35 minutes with a crew of five men. In June of 1946, the Arnold Line, which at the time ran mainly from Mackinaw City to the Island, merged with the Island Transportation Company, which ran a St. Ignace to Mackinac Island route.

In 1950, Shepler built a 30-foot cabin cruiser with an enclosed cabin and twin gas engines that could carry 24 passengers.

In 1954, the construction of the Mackinac Bridge sparked the idea of a sightseeing cruise to the site. Although this business dropped a bit when the bridge was completed and tourists could actually drive across it. Shepler’s continues to be innovative. They now offer night cruises and lighthouse cruises in addition to regular ferry routes.

Shepler’s added a bigger vessel to their fleet in 1966 which could carry 120 passengers, though it was a bit slower than its other boats. In 1969, Shepler built a new vessel that was efficient in both capacity and speed. 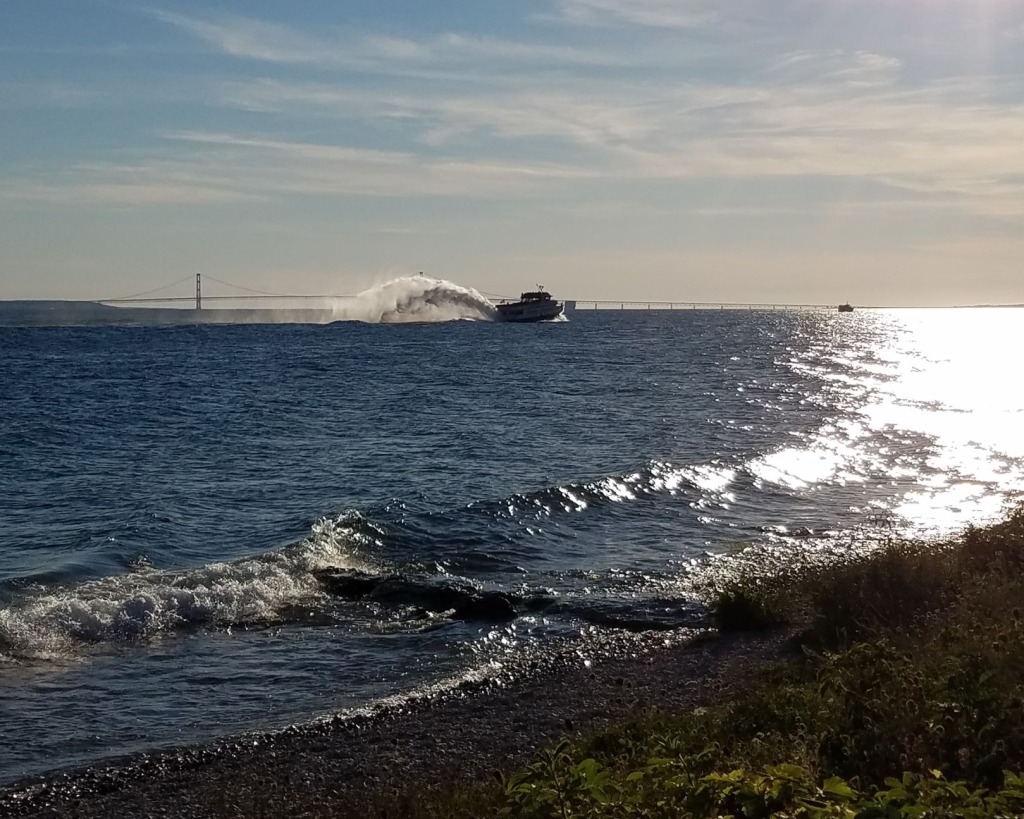 The year 1979 brought a third competitor, the Star Line Ferry, to the Straights. This company was started by five stockholders, headed by Tom Pfeiffelman and Sam McIntire. They named their ferry service after the stockholders, making a five-point star. Star Line started with slower ferries but quickly upgraded to a fast ferry, the Marquette. Over the next few years, all of their slower boats were replaced.

In 1987, the first of three catamaran ferries for Arnold was added to their fleet. Star Line responded with an 85-foot fast ferry of their own. It was modeled after a luxury yacht and had twin hydro jets. One of these pointed out of the water to create their signature plume of water following the boat.

In 1988, William Shepler died and his son, William Jr. took the helm. It remains in the Shepler family to this day. William Jr.’s three children run the company. Sadly, the same cannot be said of the Arnold line. In 2010, the Brown family announced that they would be selling Arnold Transit to James Wynn, a move that did not end well. A board was developed, and in 2014, the company suffered financially because of Wynn’s mismanagement. He was removed from his positions by the board and operations were taken over by the original investment group in Cincinnati. In 2016, Arnold Line sold its assets, which included the boats, docks, and the name of the service. They were purchased by Star Line, which now gave them the right to claim the title of the oldest ferry line in the straits.

Today’s high-speed aluminum-hulled ferries speed to and from the island with a three-person crew generally at 20 to 30 mph, but on a clear day they can cross in about fifteen minutes. Although the crossing can sometimes be cold and windy as the straits are known to invite wild weather, if you have had the opportunity to ride one of these ferries, I dare say you remember it as a great part of the trip to Mackinac Island. Ahhhh, there goes another horn! Not sure if it’s a Star Line or a Shepler’s but I know I love that sound!