This month, we once again travel north to the “Great Turtle” better known as Mackinac Island. One of the most famous landmarks on the island, the Grand Hotel, has its birthday on July 10. Built in 1887, it continues to welcome visitors from around the globe. It is perhaps best known for having the longest porch in the world. The rich history of Mackinac’s Grand Hotel also includes starring alongside Jane Seymour and Christopher Reeve in the movie, Somewhere in Time. Plus, this beautiful structure has been visited by five US Presidents, as well as Thomas Edison, and Samuel Clemens. aka Mark Twain.

The Grand Idea Is Born

Readers may recall that Mackinac Island National Park became the second National Park in the United States in 1875. This led the always historically popular gathering place to have an even larger increase in visitors to the island. By 1886, leaders from the Michigan Central Railroad, Grand Rapids and Indiana Railroad, and Detroit and Cleveland Steamship Navigation Company recognized an opportunity and wanted to capitalize on the nation’s growing desire for recreational travel. Mackinac Island would be the perfect place to construct a luxurious hotel, one they hoped would become America’s “Summer Palace.”

These companies formed the Mackinac Island Hotel Company and purchased the land to build the hotel. They agreed on a design from Detroit architects Mason and Rice. The construction was to be overseen by Charles Caskey, a prominent resort-builder. He had designed several seasonal cottages throughout the area. Along with his brother-in-law Alphonse Howe, Caskey gradually created a stunning five-story resort hotel using Mason and Rice’s plans. The building featured many outstanding amenities, including dining facilities, meeting spaces, and 286 gorgeous guestrooms. Its exterior boasted stunning Queen Anne-inspired architecture, along with accents of American Colonial Revivalism. Amazingly, the construction of the building only took 93 days to complete.

Just over three months to build the resort seems unbelievable. However, after being chosen to head the project in the fall of 1886, Caskey found out the hotel needed to be ready for business by the following summer because rooms had already been reserved. This gave him less than nine months to complete construction. He took a year off from building cottages to focus on the project but ran into some snags. Finding labor was a challenge because of a lack of available workers, and getting materials to the island was even more difficult, particularly since winter was fast approaching.

Caskey didn’t let this stop him. He agreed to pay 600 workers double the standard wage of the time, then used horses to sled lumber across the frozen waters that surrounded the island. This was similar to the way the British moved Fort Michilimackinac to the Island during the American Revolution. Eventually, there was such a large pile of lumber to be seen on the island that locals called the project “Caskey’s Folly.” He wouldn’t be deterred, however.

When construction was to begin the workers were housed in a tent village and split up into three different shifts. The night workers used lanterns and candlelight when construction began in March 1887. Caskey ran into another problem when workers eventually demanded triple wages, but Caskey didn’t back down and the pay scale remained double the standard wage. They were able to get the project done way under the desired time. 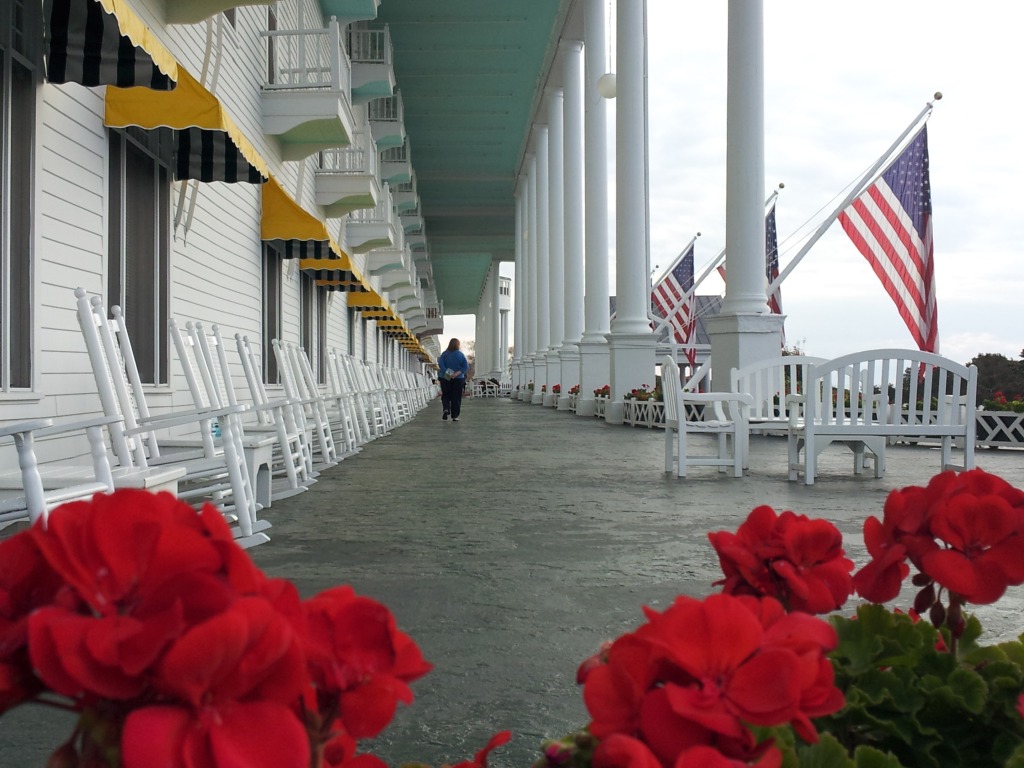 Prior to the hotel opening on July 10, 1887, it had been heavily advertised to residents living in Chicago, Erie, Montreal, and Detroit as a summer retreat spot. These vacationers from around the world began to arrive by lake steamer and rail in Mackinaw City, where a catamaran was used to transport them over to the island. The year of its opening, nightly rates ranged from $3 to $5 a night, which might seem inexpensive, but by today’s standards, that would be $90 to $150 a night.

The hotel’s 600-foot covered Front Porch soon became the primary meeting spot for anyone on Mackinac Island. As mentioned earlier, many important American figures visited the Grand Hotel around this time including Thomas Edison. It was quite common to see Edison play with a few of his inventions while visiting. One such time when he unveiled his phonograph on the front porch. Mark Twain also made many stops on his Midwest tours, and Presidents Grover Cleveland and Theodore Roosevelt also visited.

The hotel’s popularity grew and the owners decided to tap into a growing activity: golf. In 1901, the first of two nine-hole courses, the Grand Nine, was designed by golf course architect Tom Bendelow. It quickly became immensely popular.

In 1919, W. Stewart Woodfill joined the Grand Hotel as a desk clerk. After serving the business in several ways, he purchased the hotel two decades later amid the Great Depression. Despite the economic uncertainty of the time, the Grand Hotel reached new heights in popularity due to Woodfill’s stewardship. His management succeeded in increasing the number of guests coming to the hotel including influential guests like Presidents Franklin Delano Roosevelt, Harry S. Truman, and Dwight D. Eisenhower. He even convinced Hollywood producers to shoot portions of the 1947 musical comedy, This Time for Keeps, on-site. The film starred Jimmy Durante and Esther Williams.

In 1934, the Mackinac Island airport was built, giving visitors another way to reach the island. Once they landed, guests could be brought down in horse-drawn taxis.

In 1957, the Grand Hotel was designated as a State Historic Building giving more prestige. Also in the 1950s, R.D. “Dan” Musser joined the staff as a cashier. He quickly rose through the ranks to become W. Stewart Woodfill’s most trusted lieutenant. Musser fell in love with the building and eventually purchased it outright from Woodfill in 1979. Musser made many expansions and changes while keeping its historical charm. He and his wife, Amelia, initiated an ongoing series of renovations that continued to preserve the rich heritage of the Grand Hotel.

In 1972, the hotel was named on the National Register of Historic Places. Musser and his family continued their work and debuted many new facilities throughout the 1970s and 1980s. This included the Woodfill Conference Center, the Cupola Bar, Astor’s Hair Salon, Margaret’s Garden, and The Audubon Wine Bar.

In the late 1970s the Mussers hired Carleton Varney to update the facilities. Varney was a noted decorator who had also done work in the White House. He kept the late 19th-Century décor, including the beautiful and colorful Pelargonium geraniums. He purposely designed the hotel so that all the rooms would have at least one unique aspect.

There are several types of rooms, the most prestigious of which are the Named Rooms. These include six suites consisting of two bedrooms connected by a parlor. Two of these suites, the Grand Suite and the Carleton Varney Suite, overlook the Mackinac Bridge and the Straits of Mackinac, likely one of the best views on the entire island. The Presidential Suite is located in the center of the hotel with a balcony over the porch. Another detached structure added in early 2000 is named the Masco Cottage.

In addition to these suites, seven more are named for and designed by seven former First Ladies of the United States. There is the Jacqueline Kennedy Suite, with carpet that includes the gold presidential eagle on a navy blue background and walls painted gold. The Lady Bird Johnson Suite boasts yellow damask-covered walls with blue and gold wildflowers. The Betty Ford Suite is colored green with cream and a dash of red. The Rosalynn Carter Suite has a sample of china designed for the Carter White House and wall coverings in Georgia peach. The Nancy Reagan Suite has signature red walls and Mrs. Reagan’s personal touches. The Barbara Bush Suite is designed with pale blue and pearl colors and has both Maine and Texas influences. Lastly, Laura Bush Suite is decorated with bright cream and floral patterns inspired by the Texas prairie.

In the 1970s, Hollywood arrived to film a new movie. Universal studios brought Christopher Reeve, Jane Seymour, and Christopher Plummer, along with motorized vehicles, to film Somewhere in Time. The studio needed special permission from the City of Mackinac Island to bring cars onto the island for use in the film. Though not very popular with the critics at the time, many island visitors bring up this now-timeless movie. It is so popular that every October the hotel hosts an annual convention for fans of the cult classic.

The golf course continued to grow in popularity. Thus, in 1987, the hotel commissioned architect Jerry Matthews to renovate The Grand Nine. In 1994, Matthews returned to the island where he designed the Woods Nine. This new course is located in the interior of Mackinac Island with views of the Mackinac Bridge and the Upper Peninsula. The two historic golf courses were melded together to form one course that is now known as The Jewel. This is considered one of the most unique courses in Northern Michigan as well as the United States. It is the only course in the country with horse-drawn carriage rides between nines and is truly a grand golf experience for those who enjoy the sport. President Gerald Ford was especially fond of golfing here.

Before 2007, air conditioning was only available in public rooms at the hotel, such as the lobby, parlor, and the main dining room, (known as Salle a Manger in French). Due to the building’s original, design, it was difficult to add air conditioning to the guest rooms. It was this year that the rest of the hotel became air-conditioned after 170 guest rooms were installed with unique heat exchangers which cool the air through contact with the bathroom cold water system. 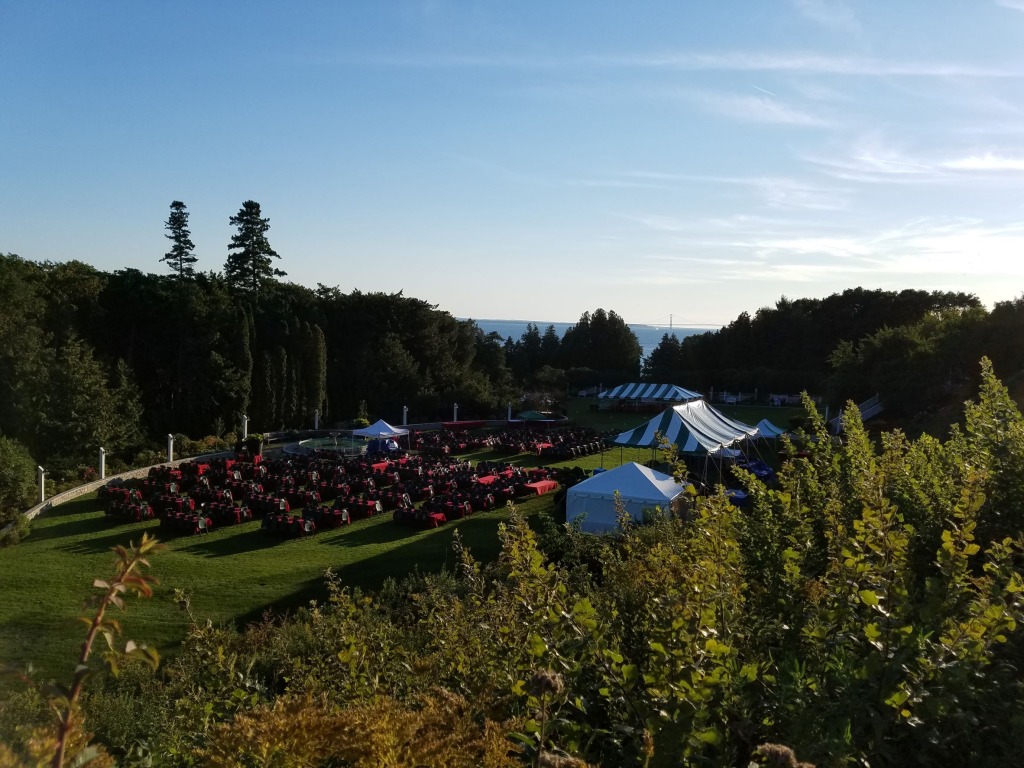 In September 2019, Dan Musser III announced that his family, which owned the hotel for nearly nine decades, was selling to KSL Capital Partners.

The Grand Hotel continues to be a destination for politicians, business associates, and labor leaders to host conferences. In addition, countless other visitors just wanting to enjoy the beauty and ambiance of the special and unique hospitality continue to spend their vacations at the Grand.

Conde Nast Traveler “Gold Lists” the hotel as one of the “Best Places to Stay in the Whole World” and Travel + Leisure magazine lists it as among the “Top 100 Hotels in the World.” The Wine Spectator gave the Grand Hotel an “Award of Excellence” and it was included in Gourmet magazine’s “Top 25 Hotels in the World” list. The American Automobile Association (AAA) rates the facilities as a four-diamond resort and in 2009 named the Grand Hotel one of the top 10 U.S. historic hotels.

The history of Mackinac’s Grand Hotel demonstrates that it is truly an attraction worth visiting. Go, even if you are only able to view this amazing facility from a distance, but, if you can manage, stay as a guest!