Disaster at the Barnes-Hecker Mine

We may not often think of how important mining has been to the history of Michigan. When we think of major economies in our state, we think of the automobile industry and our lumber companies. However, Michigan has four important mining ranges. First, there’s what’s known as Copper Country in Keweenaw, Houghton and Ontonagon counties. Then, the Marquette Iron Range of Marquette and Baraga counties. The Menominee Iron Range is in Dickinson and Iron counties. Lastly, there’s the Gogebic Iron Range of Gogebic county. We have also had gold mines in Marquette county and gold exploration in Gogebic county. Silver explorations also operated in Ontonagon and Baraga counties. In the past 150 years Michigan’s Copper and Iron Mining Ranges have produced over a billion tons of iron ore and several billion pounds of refined copper. However, it has come at a great cost. Especially in places like the Barnes-Hecker Mine.

As important as mining has been to our state, it is a dangerous profession. The first mining accident in Michigan was on February 13, 1874, at the Phoenix View Copper Mine. At 7 o’clock in the evening, a horrible explosion rocked the mine and killed six miners.

The most recent Michigan mining accident was on November 3, 2018. Miner Jill M. Klein, a 44-year-old supervisor with three years of experience, was in her parked pickup truck when a 150-ton haul truck ran over it. Coincidentally, that was the anniversary of the worst accident in Michigan mining history, which was the Barnes-Hecker mining disaster of 1926.

That year at the Barnes-Hecker mine of Ishpeming in Marquette county, 51 miners were killed. They left 42 wives without husbands, 132 children without fathers, and an entire community in despair. Forty-one of the bodies were never recovered and remain entombed underground at the Ely Township site. The mine eventually closed forever. The more I read about the disaster, the more tragic I realized it was. 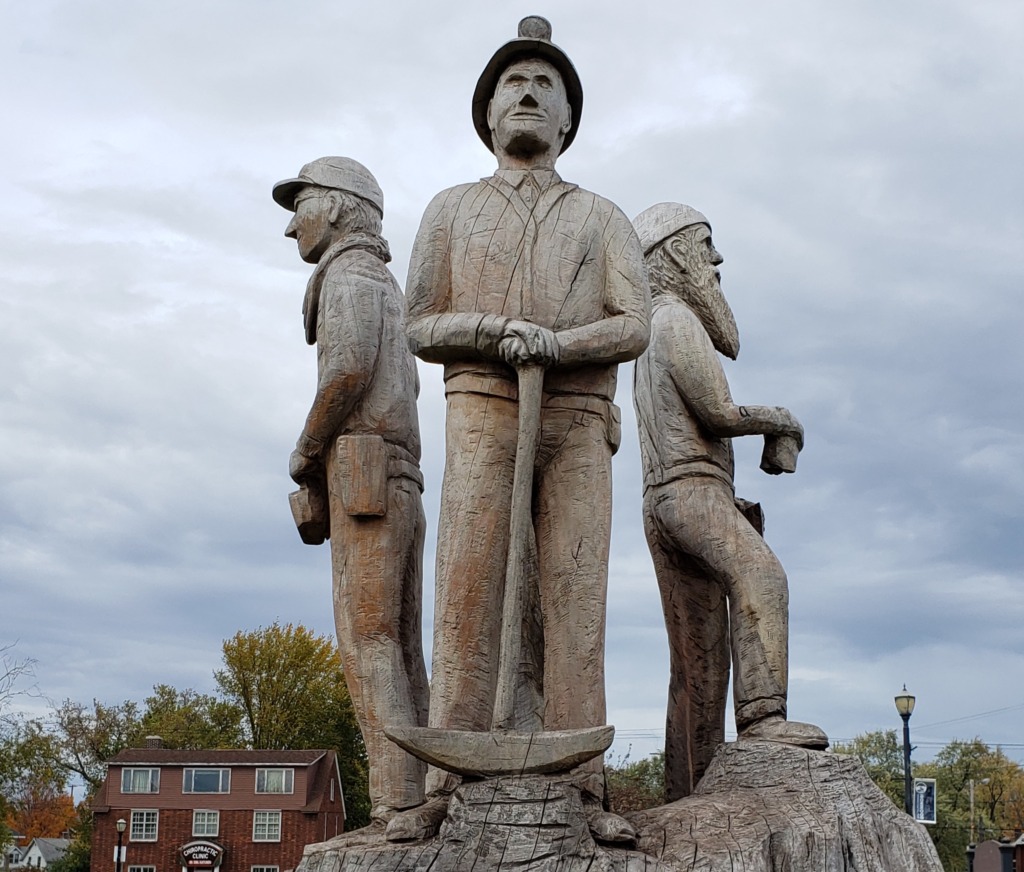 The Barnes-Hecker Mine was owned by the Cleveland-Cliffs Iron Company out of Ohio. It was divided into three levels and reached a depth of 1,060 feet in its main shaft. Workers were lowered into the mine by electric cages. There was an escape tunnel to the nearby Morris Mine, but it did not help the victims that day. The 150 employees worked in two shifts and were working a section of the mine that was underneath 210 feet of glacial surface material and small underground ponds. Most of the water had been drained prior to the cave-in, and the conditions were deemed safe. Most miners at Barnes-Hecker were hard-working immigrants, like other mines all over the country. Many came from Scandinavia and the British Isles.

At 7:30 am, the men from the day shift crew descended. They were joined by several executives of the mining company who were escorting the Marquette County Mine Inspector, William E. Hill, through the mine. Hill had just been voted in as inspector. Other miners included mine captain William Tippett and his brother Walter, a former Marquette City policeman. He had shot and killed a murder suspect while on the job and retired from the force. It was Walter’s first day in the mine. Another miner, Louis Trudell wasn’t even supposed to be working that day, but had agreed to trade shifts with a fellow miner. Some families sent multiple members down that day: father and son duos Thomas Kirby Sr. and Jr. and Edin and Herman Chapmun, as well as the Tippett brothers.

A blast occurred in the Barnes-Hecker Mine at 11:25 am, rupturing an underground reservoir. An avalanche of mud and water flooded the mine as a stope collapsed. One of the men had been in the process of routine dynamiting and the blast resulted in the loss of power and a cave-in. That flooded the mine and trapped everyone within minutes, leaving very little time to escape. Rutherford Wills, a 22-year-old newlywed, felt a puff of air blow out his light while working on the second level. He rushed to the shaft and called out to others to follow and get out. Unfortunately, the lack of a common spoken language may have prevented some workers from immediately understanding the warning. Three of Rutherford’s friends, Tom Kirby Jr., Joseph Manki, and Jack Hanna followed to the ladders to begin the frantic climb.

As the water rushed in, it carried out many of the timbers dividing the compartments. The sudden flow of water also prevented the use of bulkheads, which were used as dams to contain the water, along with the mine water-doors.  The men were engulfed before they could escape.

Above ground, workers attempted to bail out the water with buckets as families stood watching in shock. Edward Hillman, Olivian Miners and Albert Tippett had just left the shaft and tried to help after hearing the crash of water and timber. Albert had two brothers and a stepbrother left underground. It only took about 15 minutes before the water was within 185 feet of the surface.

Mine inspector Charles J. Stakel was scheduled to visit the Barnes-Hecker mine that day, but his wife needed the car, so he walked to the closer Morris Mine to do an inspection there. At 11:30, a mine captain rushed to inform him of the situation. Stakel rushed over to find a flooded mine and an entire shift, some of the men his friends, trapped underground.

Four agonizingly long hours later, Stakel and a handful of other supervisors used the escape tunnel to go down into the Morris Mine to see if they could get through and find survivors. They went as far as they could by electric motor but ran into waist-deep mud and sand. They came across the battered bodies of William Tuppett, a mine captain, and William Hill, the county mine inspector. Another body was too muddy to be identified right away. It was later found to be Thomas Kirby Sr. They retrieved seven other bodies from the hatch. Twenty minutes after the rescue party left with the bodies, a dam broke and the mine flooded again. The water eventually receded to 540 feet, and at 8:00 pm. The bodies that had been found were finally taken to the surface. Three more bodies were found in the shaft at that time.

As word of the disaster spread, friends and relatives gathered around the mine, waiting for news of the men below. Women clung to their sobbing children, knowing the likelihood of any other survivors was slim. The next day, a volunteer crew from all the Cleveland-Cliffs mines in the area came together to reclaim the flooded shaft. It was dangerous work, and ultimately in vain.

The losses devastated the whole community for many reasons. One woman lost her two brothers and her husband in the cave-in. One of her brothers was a widower with four children. The woman herself had four children of her own and now had eight children to provide for on her own. 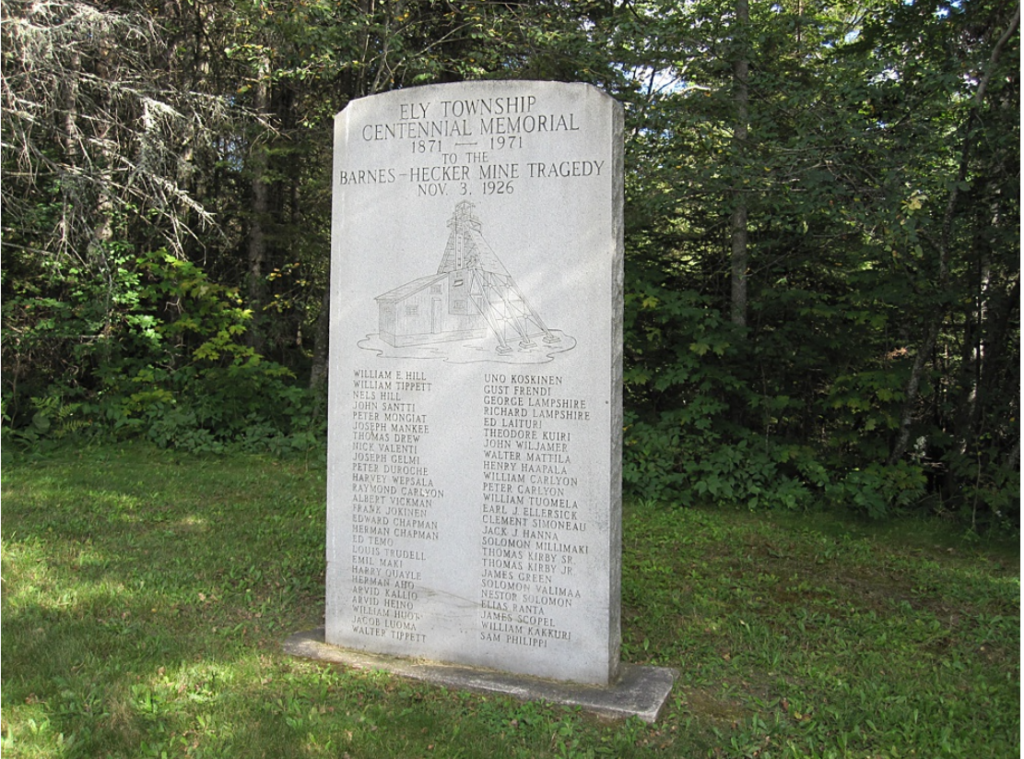 On November 6, only three days after the accident, twelve mining executives from the Lake Superior District met in Ishpeming and concluded that the mine was operated according to best mining practices and that all possible care was taken by the company to keep their workers safe. The accident was determined to have been caused by reasons that could not have been predicted. Some argue this point, claiming that the mining company knew about underground water sources above the mine.

After weeks of effort to restore the mine shaft and recover any bodies, sadly, only three more were found. Cleveland-Cliffs decided to abandon the mine on November 20, 1926, and it was permanently sealed. It remains a grave for 41 of the 51 men lost that day.

On February 2, 1927, the Marquette County Coroner’s Inquest was held. Many individuals gave testimony, including mine officials and other employees with knowledge of the accident. The inquest lasted only one day and unfortunately not much resulted from the session. It was ultimately deemed to be an accident yet the mine company did give each family $50 a month in compensation, which helped somewhat financially but did not come close to replacing the loss of so many loved ones.

As mentioned earlier, the Barnes-Hecker Mine disaster left 42 widows, 132 children fatherless, and an entire community devastated. Each family dealt with the losses in their own ways. Some talked about the accident while others avoided the topic. 41 men were never recovered, which did not allow for closure for many of the families. Many of the men left behind, most notably Rutherford Wills, had long-term effects. Wills was unable to work in a mine ever again and relocated to Flint to work for Buick. He had nightmares for the rest of his life.

The people that died in this accident, and all mining accidents, gave the ultimate sacrifice while simply trying to provide for their families. While the owners of these mines prosper and the states benefit, we must always remember the risks that these workers take every time they go down into the mines and be grateful. The hard work they do benefits the people of this state in so many different ways.