A striking new piece of art now adorns Detroit’s cityscape. It is the result of an extensive search that started when the convention building was called TCF Center, and ended after it became Huntington Place. The outdoor sculpture highlights the main circle drive near the entrance. Called Floating Citadel, it is the inspiration of local artist Scott Hocking.

The process began with a call for artists back in January of 2020. Prospective artists had to attend a mandatory meeting in person or via Zoom at what was then TCF Center in March of 2020. The initial meeting was packed with 100-150 people in person, as well as virtual attendees, according to the artist, Scott Hocking. Little did we all know that Covid-19 was about to put an end to such opportunities. Thus, the rest of the competition took place during the pandemic. Artists had until June 2, 2020, to submit their applications.

In August, Hocking was notified that he was a finalist. Next, he needed to make a small model version of the proposed sculpture, known as a maquette. It was a roughly 1/2-inch scale model of the work and site. From the finalists, one proposal would be awarded a budget of $250,000 to support its conceptualization, fabrication and installment, with an additional $50,000 for the artist. By January, Hocking learned that his creation was selected.

Once selected, Hocking embarked on a nationwide search for foundries that could make a bronze work of this scale and within his budget and timeline. He contacted approximately 30 different foundries over the next several months. By May 2021, he found his collaborative partner, Bollinger Atelier in Tempe, Arizona. They worked together on creating the piece over the next year, with the sculpture mostly complete by June of 2022. The 11-foot diameter sculpture made its way to Detroit in July. It was unveiled a few weeks later.  All told, the project took over two and a half years to complete, mirroring the trajectory of the pandemic.

The sculpture is on a location that was once home to the original French settlement of Detroit in 1701, and now serves as a hub of activity in a vibrant city. Consequently, the site itself helped inspire the design, as well as the name. Additionally, Floating Citadel is influenced by Savoyard Creek, the original Detroit River shoreline, and the Village of Detroit’s defensive. The sculpture also connects to Michigan’s Upper Peninsula and Hocking’s own copper-mining ancestry. He comes from a long line of Cornish copper-miners who settled in the U.P. 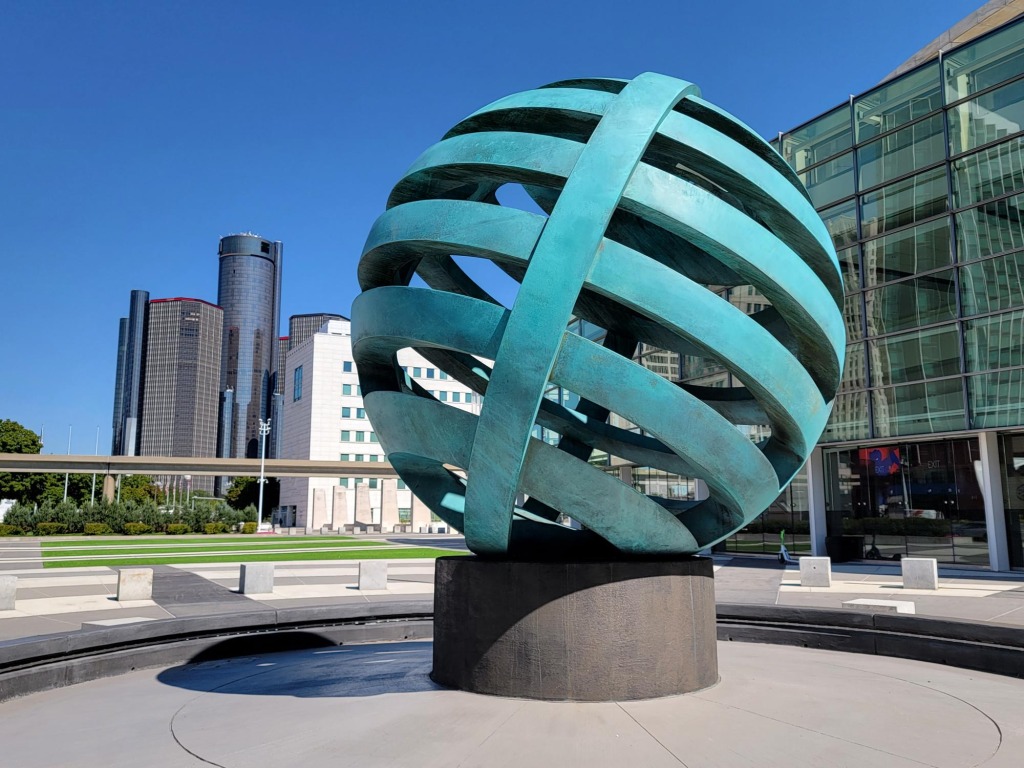 Aside from his Cornish roots, Hocking is a descendent of Polish immigrants and is a 6th generation Detroiter. He has a Bachelor of Fine Arts from Detroit’s prestigious Center for Creative Studies. Hocking has received multiple awards, including a Kresge Artist Fellowship and Knight Foundation Arts Challenge Grant. His global recognition includes residential grants in France, Iceland, Australia, Canada, Brazil, and throughout the United States.

Michiganders have some exciting upcoming opportunities to view more of his work. Scott Hocking: Detroit Stories opens November 5, 2022 at Cranbrook Art Museum in Bloomfield Hills. The David Klein Gallery in Detroit is also hosting a special exhibition, which opens November 19 and runs through February 11, 2022. Further north, the Baber Room Gallery at Central Michigan University is slated to host a Hocking exhibition in 2023.

“It’s a bit surreal to have my art installed in the civic center of Detroit, in the center of the city where I’ve been my whole life,” said Hocking. “So much iconic art and architecture surrounding it and so many layers of history right on this spot, it’s mind-blowing. I’m truly grateful to be a part of that ongoing history and I feel pretty lucky.”

Hocking’s Floating Citadel now takes its place among iconic sculptures like the Spirit of Detroit and the Joe Louis Fist. It’s quite an honor for a kid who grew up going to the auto show in the neighboring building. It also joins a cornucopia of creations available for public viewing in and around Huntington Place.

“Great cities have great public art and Detroit is gaining a national reputation for its murals and other forms of beauty we are creating across our city,” said Mayor Mike Duggan. “We are fortunate to have this beautiful new work by internationally acclaimed artist Scott Hocking to add to our public collection and to welcome visitors to Huntington Place, which has its own great collection of art to explore and enjoy.”