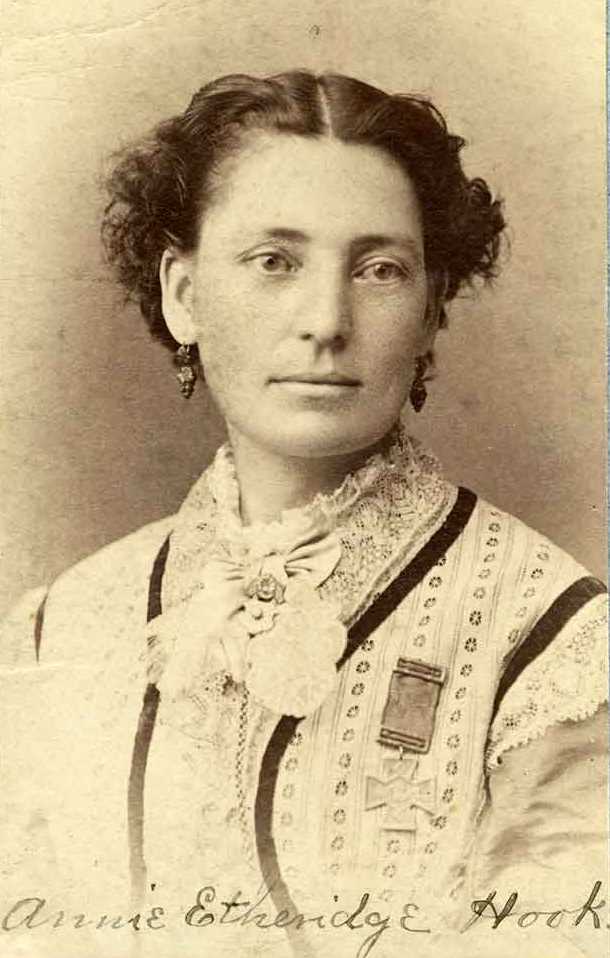 There are many accounts throughout history of women who dress as men and go off to fight gloriously in battle and the Civil War has no shortage of examples. One of the most well-known women who joined the army is from the state of Michigan. Annie Etheridge’s story plays like a movie. She was a woman who did whatever she could to help others, like easing the pain of the wounded and spurring many a Union soldier to fight harder.

There is very little known of Annie’s childhood or of her early married life, but most accounts agree that Anna Lorinda Blair was born on May 3, 1839 in Wayne County, Michigan. The Blairs were a wealthy family but Annie’s mother, Cynthia, died when Annie was young. Shortly after her mother’s death Annie’s father, John, moved them to Milwaukee, Wisconsin. When she was only sixteen years old, Annie married David Kellogg. Virtually nothing is known about the man, but it appears that he died, because in 1860, she married James Etheridge. As with Kellogg, very little is known of Annie’s second husband. Not long after her second marriage, Annie’s father’s fortunes took a turn for the worse and he lost everything. He moved back to Michigan, but Annie stayed with James in Wisconsin. However, in early 1861, Annie traveled to Michigan to visit her father and care for him. Her husband accompanied her. In addition to caring for her father, Annie worked in a hospital that had a poor reputation for patient care. She tried to reform the poor conditions, but before any of her plans could be put into place, the Civil War broke out. Her hsuband enlisted in the 2nd Michigan Infantry and Annie joined as well. She was one of twenty women to serve as a vivandiere, or Daughter of the Regiment. A vivandiere is a French name for women attached to military regiments.

Annie and the other women did many things for the soldiers. They cooked, did laundry and wrote letters. In addition to these chores, Annie tended to the sick and wounded, comforted the dying and encouraged the soldiers to fight. She became known to some as Michigan Annie and Gentle Annie, after an 1856 Stephen Foster song. Her first combat experience was on July 18 during the Battle of Blackburn’s Ford in Virginia. She nursed the wounded and carried water to the dying soldiers.

Annie was involved in many battles in 1862. In May, she aided the wounded and dying during the Battle of Williamsburg, and on September 1, during the Battle of Chantilly, General Philip Kearny witnessed her bravery. He reportedly told her and others that he would be recommending that she be promoted to sergeant and be given a horse. Unfortunately, the general was killed in battle, and Annie did not receive the promotion or the pay raise that went with it. She was, however, given a horse. Later that month, she helped in the Battle of Antietam. After that battle, the 2nd Michigan Infantry was sent to Tennessee, but Annie decided to remain with the Army of the Potomac and enlisted in the 3rd Michigan. Later, in August of 1862, during the Second Battle of Bull Run, Annie was almost captured while attending to the wounded, but against her wishes she was forced to follow her regiment when the Confederates came near. She finished out the year by aiding the men during the Battle of Fredericksburg.

In 1863, Annie was notably a part of the Battles of Chancellorsville and Gettysburg, continuing to act as a combat medic. During the Battle of Chancellorsville, Annie was at the rear of the line, encouraging the soldiers and waiting to help the wounded. When the Union men saw her, they allegedly cheered, revealing their position to the rebels. The enemy fired in that direction. An officer put his horse between Annie and a tree that she had taken shelter behind. Another volley was fired and a ball zipped by her hitting the officer and killing him immediately. Another bullet grazed her hand and slightly wounded her horse. That year, she received the Kearny Cross, a military award given to Union officers who performed acts of extreme bravery and heroism in the face of the enemy.

In May of 1864, Annie found herself in the Battle of Spotsylvania Court House. A fellow soldier recounted that Annie met a number of soldiers retreating. She immediately attempted to encourage them to fight, as she had done many times before during the war. When simple motivation didn’t work, Annie shamed them into doing their duty and offered to lead them into the fight. She did this, under heavy fire from the enemy Confederates.

All women were told to leave camp by order of General Ulysses S. Grant, when he became commander of the Army of the Potomac. In July Annie was sent to City Point near Petersburg to help at the hospital there. Officers who knew of Annie’s importance to the Union Army signed a petition to allow her to remain with the main army, but Grant denied it, and Annie was to stay at City Point. She apparently disobeyed Grant’s order however, as records show that she was in multiple battles that summer including the Wilderness Campaign, Cold Harbor and Petersburg. Being the devoted nurse that she was, accounts say that Annie often rode back to look in on the men. Later, during the Chickahominy Campaign, she worked for the Hospital Transport Service, aiding in the transportation of wounded men from parts of Alexandria, Virginia to hospitals in Philadelphia, New York City, and Washington City.

In early 1865, Annie was allowed to return to her vivandiere duties in the Army of the Potomac and after Robert E. Lee surrendered the Army of Northern Virginia at Appomattox, she returned to Michigan. On July 1, she was mustered out of the army in Detroit.

Of Annie, Color Sergeant Daniel Crotty of the 3rd Michigan Infantry said in his memoir, “The world never produced but very few such women, for she is along with us through storm and sunshine, in the heat of the battle caring for the wounded, and in the camp looking after the poor sick soldier, and to have a smile and a cheering word for everyone who comes in her way. Every soldier is alike to her. She is with us to administer to all our little wants, which are not few. To praise her would not be enough, but suffice to say, that as long as one of the old Third shall live, she will always be held in the greatest esteem, and remembered with kindly feelings for her goodness and virtues.”

After the war, Annie continued to help others. She worked for the United States Treasury Department, and again cared for her ailing father. After many years of petitioning, Annie began to receive a monthly pension of $25 for her service to the United States, which was very well-deserved. She died at Georgetown University on January 23, 1913, and is buried in Arlington National Cemetery alongside her third husband, Charles Hook.

I believe that Annie Etheridge is a woman whose story deserves to be told. She met with so many issues in her life, growing up without a mother and having a sickly father, the early death of her 1st husband and marriage to a wastrel of a second husband, and enduring the hardships of war up close and personal, yet she never gave up. Annie was inducted into the Michigan Women’s Hall of Fame in 2010. Her story and the way she lived her life is an inspiration to both men and women.  Annie’s loyalty, bravery and devotion to those around her is an example for everyone to follow.

Other resources on this subject that may be of interest: