The past and preservation of Pictured Rocks

.“We go along the coast, most delightful and wonderful. Nature has made it pleasant to the eye, the spirit and the belly.” French fur trader and explorer Pierre Esprit Raddison wrote those words in his journal as he traveled through what is now Michigan’s Upper Peninsula.  What he was seeing, was our beloved Pictured Rocks. These formations are known worldwide as a beautiful vista to behold. Thankfully the preservation of Pictured Rocks means that they can be enjoyed for many more lifetimes.

Steps for the long-term preservation of Pictured Rocks were taken on October 15, 1966. Congress authorized the Pictured Rocks National Lakeshore, making it the first nationally designated lakeshore in the United States. These towering cliffs, pristine beaches, rolling sand dunes, cascading waterfalls, and dense forests along Lake Superior would now be protected land. Like most of Michigan’s Upper Peninsula, the area surrounding Pictured Rocks has a fascinating history. Both the logging and the iron industry have played a major role, along with shipping and tourism.

Massive glaciers formed the picturesque area. American Indians, fur traders, and explorers noted its beauty before the area was formally settled. The earliest known documented account of what the area was like was in 1659 by Pierre Esprit Raddison. He commented that the American Indians would give gifts to the beautiful rocks in veneration. The soil was not good for agriculture, but the people in the area learned to use other resources and were able to build communities.

The discovery of iron in 1844 brought the first large economic activity to the area, aside from fur trapping. However, it wasn’t practical to harvest the iron until the Soo Canal was built in 1855. During and after the Civil War, there was a national demand for iron. Though no ore was mined in the Pictured Rocks area, investors decided to take advantage of the close proximity to where the ore was being extracted.

The Schoolcraft Blast Furnace, one of the 29 in the Upper Peninsula at the time, was built at what is now Munising Falls. It began producing iron on June 28, 1867. This enterprise was spearheaded by Peter White and Henry Mather and paid for by investors in Philadelphia. The furnace was constructed near Munising Creek and could produce 20 tons of pig iron, also known as crude iron, per day. A log road was built from the furnace to the lakeshore, and a small community sprang up nearby. In 1870, poor financial management bankrupted the company, but Peter White reorganized the company, and it ran well until the Panic of 1873. The price of iron spiraled. Consequently, the furnace shut down in November of 1877. Many of the residents left and the town of Munising was moved to its current location. 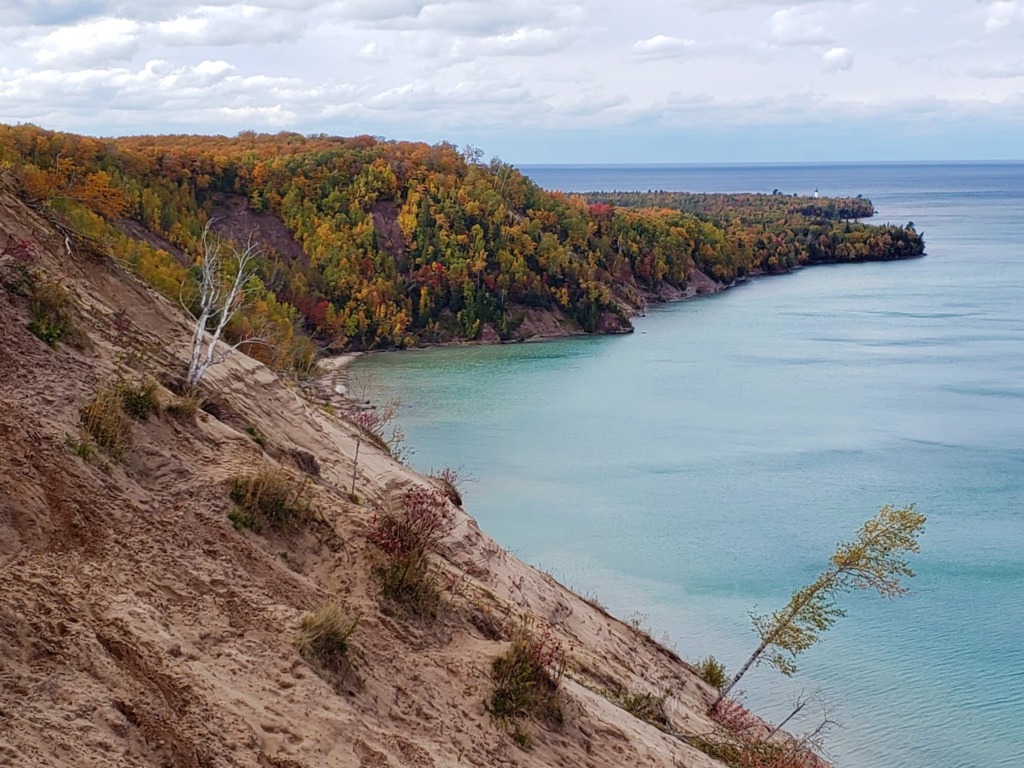 A second major economic enterprise in the area was logging. In the 1840s, white pine in New England had been exhausted, so the companies began looking west for more opportunities. Michigan offered not only lumber but also waterways that could transport the logs to mills and markets. In 1877, the first logging enterprise in the Pictured Rocks area was started by Joseph Weller. The logs were rafted to Munising Bay and Au Train Bay, assembled into booms, and towed to Garden Island, Ontario. Once there, they were squared and shipped to Liverpool, England. In 1879, Weller shipped an astonishing 150,000 cubic feet of lumber.

By 1880, extensive logging activity began in the area of Hurricane River and Kingston Plains, where trees were more plentiful.  Two years later, Thomas G. Sullivan began logging, mostly during the winter months. The winter made it easier. Logs could be hauled out on sleighs to decking areas on the shores of Lake Superior. Then in the spring, they were rolled into the lake and assembled into rafts. At times, chutes for sending logs were needed. The most famous of these in the Pictured Rocks area was Devil’s Slide, east of Au Sable Point.

Logging camps were self-contained communities that included an office, company store, bunk house for the workers, a mess hall, kitchen, a blacksmith shop, and a barn. In 1883, Baptist minister Columbus Hall vacationed in the Picture Rocks area and recorded his experiences, especially in the Beaver Lake logging camp. His reports give us a good picture of what life was like. Beaver Lake was also considered a log storage site, where logs were held behind a dam before being sent downstream.

In 1885, one of the largest sawmills, Grand Marais, closed due to the lack of white pine and the surrounding community fell on hard times. By 1890, the population had fallen from 300 to 177 citizens. In 1893, Grand Marais had a revival when the Manistique Railroad ran a spur through the settlement and more pine was found to harvest. Soon, Grand Marais sawmills were being supplied with logs by 40 miles of logging railroads. The biggest logging firm in the area was the Alger-Smith Company, which also owned the Manistique Railroad and Manistique Lumber Company. In 1909, the Marais Lumber company closed for good because of a lack of resources and the railroad abandoned the line.

Other logging companies managed to stay open because of their location and the availability of trees. Once the pine had been cleared out, loggers turned to hardwoods, especially cedar. This wood was used for railroad ties, shingles, posts, and poles. 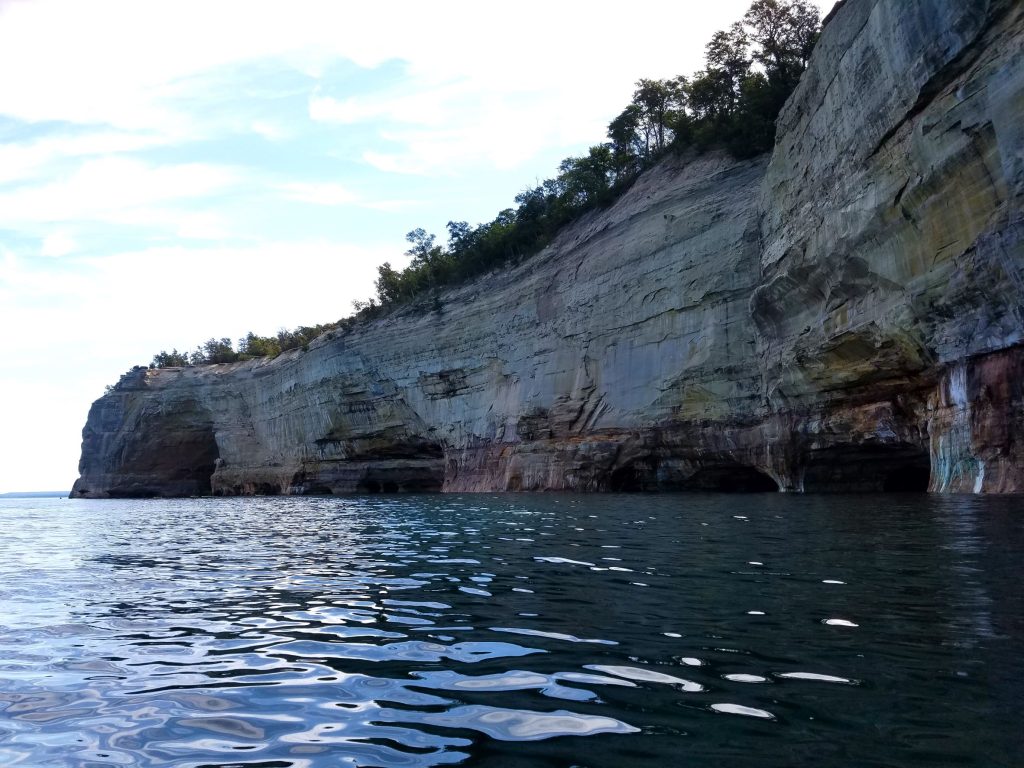 The stunning, yet rugged cliffs of the Pictured Rocks lakeshore have been historically treacherous for many ships.

There is more than logging history in this area. The waters can be rough along Lake Superior. Those magnificent rock cliffs that dominate the shoreline can be just as treacherous, and have contributed to many shipwrecks. One of the most tragic of these shipwrecks was on October 29, 1856, when the steamboat Superior went off course. Some passengers were washed from the decks into the icy water and had to swim to the rocks. Somewhere between thirty-five and forty-two people died in the wreck.

On November 2, 1870, the Mary M Scott foundered, and on July 13, 1889, the 230-foot wood steam barge Smith Moore collided with the James Pickands and sank off the coast of Superior.

On October 24, 1893, the George, loaded with 1,330 tons of coal bound for Marquette, was caught up in an intense snowstorm. Thankfully, all eight crewmen and one woman survived by rowing to Grand Island and making their way to safety.

Long before Congress enabled the preservation of Pictured Rocks, the area was little-known, and seldom seen, by out-of-state visitors because of transportation difficulties. In the 1890s, one had to hire a tugboat to visit the amazing rocks. In 1902, a civic celebration in Munising offered excursions on the steamer Hunter for visitors and locals who had never had the chance to see the rocks from the lakeside view. By the late 1940s, tourism in the state was expanding, and surprisingly, there were no roads or even paths to any of the scenic overlooks. There were simply old overgrown trails that had been used by area loggers. Much needed to be done to fully tap into the area’s tourism potential.

In 1923, a group of Munising sportsmen and the Superintendent of State Parks for Michigan proposed that the State Conservation Commission look at the area to help build tourism. Unfortunately, at the time, funding for state parks was low. Even when Alger County donated 27 acres of land, the state didn’t want to create a park at the time.

The 1950s saw another boom in tourism in Michigan. From 1957-1958, the National Parks Service conducted a survey of the shoreline to determine an area suitable for inclusion in the National Parks System. The colorful sandstone cliffs lining the shore of Lake Superior made a good option. On June 27, 1961, Senator Philip Hart introduced a federal bill to preserve Pictured Rocks and Sleeping Bear Dunes at the same time.

Hart argued that residents of crowded metropolitan areas needed an escape to outdoor recreation sites. Many local residents, mostly loggers, were not fond of the bill, but others were. Senator Hart worked with the locals to encourage this idea and pass the measures that would create these parks. He claimed that Sleeping Bear Dunes and Pictured Rocks were essential because they were among “several of the most beautiful remaining unspoiled areas in the nation.”

In early 1966, President Lyndon B. Johnson signed a proposal to protect the Pictured Rocks and Congress passed the bill, as mentioned earlier, on October 15, 1966. It seems like a long time ago, yet it’s really only been a little over 50 years. I have witnessed the beauty of this landscape myself and I encourage anyone who is able, to do the same. No matter how many pictures you see of the colorful formations, they simply do not compare to actually viewing them in person.