The life and times of Detroit’s beloved Belle Isle

Belle Isle is known to many in Michigan, especially those on the east side of the state, as a haven from the crowds of the big city. Located in the middle of the Detroit River, between the city of Detroit and Windsor, Canada, it is a 982-acre island park consisting of one main island and several surrounding islets. Belle Isle is currently owned by the city of Detroit, but since 2013 it has been managed by the Michigan State Park system. It is home to many attractions, from an aquarium to a Coast Guard station. Many of the buildings boast Victorian architecture from the early 20th century, and it is bigger than New York’s Central Park.

In the 18th Century, the area was settled by French colonists, and the island itself was under control of three native tribes, the Ojibwe, the Chippewa and the Ottawa. The French called it Hog Island because the settlers brought their livestock to the island to keep them safe from coyotes on the mainland. It was an important piece of land for the settlers because of this, and some Frenchmen even attempted to buy it from the natives outright, but were refused for reasons unknown. In 1768, life on and around the island changed drastically.

On May 4, 1768, British Lieutenant George McDougall was given permission by King George III to occupy the island because of his successful negotiations with, and capture of, Chief Pontiac during Pontiac’s rebellion in 1763. The British believed they could take over this land as they had control of Detroit City and the area around Windsor, Canada, and it was known by many of the French citizens that McDougall wanted to eventually buy the land for his own use. This was met with resistance by many Detroiters, especially a French settler named DeQuindre who had previously tried to gain ownership of the island himself. Other settlers joined the fight against McDougall buying the property because they knew they would lose their ability to inhabit the island. Leading residents gathered together and wrote a letter to British Captain George Turnbull, the commander of Detroit at the time, asking him to speak to General Thomas Gage and Governor Guy Carleton about allowing the citizens’ rights to be recognized. Turnbull refused, so the citizens contacted the higher-ranking officials themselves. Unfortunately, their pleas met deaf ears.

Earlier that year, on May 5, 1769, Native chiefs did sell Hog Island to British Lieutenant George McDougall for eight barrels of rum, three rolls of tobacco, six pounds of vermillion paint and a wampum belt, which was a common currency in the 18th Century among tribes. In the spring of 1777, McDougall finally took official possession of the island but in 1780, McDougall died and British Commandant Arent Schuyler de Peyster appraised the holdings and bought the island from his widow. De Peyster wanted to use the island to increase agricultural production in Detroit. He also had the king’s cattle moved to the island.

In August of 1812, war and terror came to the area including Belle Isle.  During the Siege of Detroit, houses on Hog Island were destroyed and the entire family of settler James Fisher was killed by American Indians as were other settlers who lived on the island. After the War of 1812, American General Alexander Macomb Jr. was assigned to the region and bought the island. He later became the commanding General of the US Army. Macomb’s son eventually sold the land to Barnabus Campau, a veteran of the War of 1812, in 1817. As early as 1840, a ferry service was in operation, bringing passengers to the island for recreational purposes and one of Barnabus’s sons, Alexander Macomb Campau, built a beautiful summer home on the island in 1874. Barnabas’ heirs eventutally sold Belle Isle to the City of Detroit in 1879. The city officially opened it to the public the following year.

Before the city even owned the land, they held a historic picnic party on the island and it was decided to change the name from Hog to Belle, after Isabelle, the daughter of Governor Lewis Cass. The city had plans to develop the island as a park, and hired Frederick Law Olmstead in the 1880s. A growing urban environment in many big cities inspired many councils to designate space for recreation and relaxation for their citizens. The park in Detroit was to be a place for men and women of all classes to congregate and spend leisure time together. Olmstead wanted to keep the plan simple, while city officials wanted a much more stunning park. Olmstead left the project when he realized the city officials would ignore his suggestions and do whatever they wanted. Very little of his original plans were used. 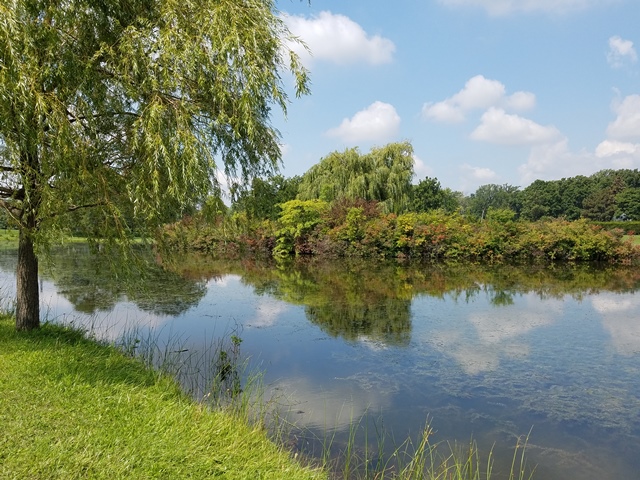 In 1882, Belle Isle was opened as a park for all seasons. However, the island had many marshy areas, so a plan was needed to drain the water. A canal system was dug, and this would eventually develop into one of the attractions for the park, as visitors could rent canoes and later kayaks to paddle through the park. The park commissioners also enlisted the Detroit Opera House Orchestra to give weekly concerts. Visitors could listen from the hillside or from canoes in the canal.

The 1880s continued to see growth for the island. In 1886, a deer park was established, which would later become the zoo on the island. In 1889, the first police station was built for the Keystone Corps, which was the police force on Belle Isle. This was also the year a steel swing bridge opened, allowing individuals to drive wagons, ride horses, or even walk to the island.

The island continued to grow and develop in the early 20th Century. In 1902, the Detroit Boat Club building was opened. The club had been established in 1839, as a sport rowing club. When their lease on the mainland was up, they moved to Belle Isle. This boat club is considered the nation’s oldest rowing club.

In 1906, Electric Park opened. This was an amusement park on both sides of the Belle Isle Bridge, and many visitors stopped here on the way to the island. The park’s main entrance was dominated by a large windmill across the street from the entrance to the park’s boardwalk. Rides and attractions included a roller coaster, Ferris wheel, an interactive simulation of the Johnstown, Pennsylvania Flood, a “Shoot-the-Chutes” ride which would take you around the rest of the park, a Whip ride, aerial swings, live entertainment, including acrobats and aerialists, a riverfront pier, a coliseum, picnic facilities, and the Palais de Danse ballroom built over the edge of the water of the Detroit River.

Other buildings were built in the 1910s to add to the popularity of the island. 1904 brought the Belle Isle Conservatory, the oldest continually running conservatory in the country which can still be enjoyed today. The same year on August 18, the Nature Center opened. In 1908, Belle Isle Casino was built, not to host gambling, but to be used for public events. In 1909, a bathhouse and bathing beach opened, allowing visitors the opportunity to change into swimsuits and enjoy the water. 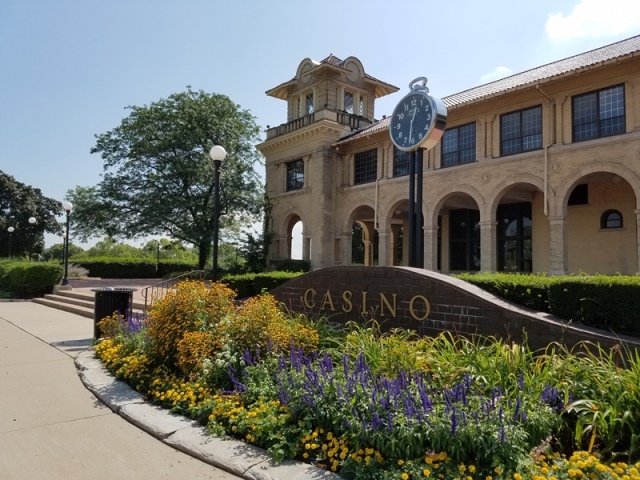 Throughout the mid-1910s, the Ford Motor Company brought in hundreds of workers to Detroit, and these individuals and their families needed a place to recreate. Belle Isle was a perfect place for this and saw a huge jump in popularity and tourism. Unfortunately, this decade was not just a time for building, sadly, there was some destruction. On April 27, 1915, a fire destroyed the swinging bridge beyond repair, and plans were made to build a new bridge to the island.

The island did not diminish in popularity in the 1920s. In fact, this decade saw the height of canoe use on the island, with over 40,000 rentals per year. In 1922, a 9-hole municipal golf course was opened, and in 1923, the new Belle Isle bridge was completed, later named for General McArthur. Hiking was becoming a popular pastime, especially for those trying to escape the city. In keeping with this, in 1924 the Detroit News Trail opened. This was a low-maintenance, nature-specific trail that visitors could take on foot or by horseback.

Fire remained a constant threat in this era, and in 1927, another fire destroyed most of the attractions at Electric Park. There were already problems with park ownership, and a series of legal battles challenged the ownership of the park. After the 1927 fire, Electric Park closed permanently. The following year, the buildings were razed to create a new grassy public park, which is now known as Gabriel Richard Park. City planners and officials felt this would be a better use of the space.

The 1930s were lean years for many Americans as they attempted to survive the Great Depression. On Belle Isle, a sawmill industry helped thin the undergrowth and cleared some forest, making it easier for visitors to navigate the trails and also helped pay for the park’s upkeep. In the winter, ice was harvested to help the park sustain itself. New projects were completed, including the William Livingston Memorial Lighthouse, which opened in 1930. This beautiful structure is the only marble lighthouse in the nation.

During World War Two, the island was closed to the public and used for troops training to fight on the now-famous island of Iwo Jima and in 1942, the US Coast Guard built a station on Belle Isle. After the war ended, the island opened up yet again to visitors.

Between 1955 and 1968 during the Cold War, Belle Isle housed a Nike Air Defense System. It was believed that the expansive industry of Detroit would make it a target for the Soviets to attack. The Launcher Area was demolished in November of 1968, and what is left is land filled with many chunks of concrete, brick and other debris sticking out of the ground with sparse grass and weeds trying to cover it.

Belle Isle’s popularity declined as tough times hit Detroit, starting in the 1960s, but in the early 2000s, organizations began to take an interest in restoring the buildings. The return of the Detroit Grand Prix to the island was a big help.

Unfortunately, in 2013, the city declared bankruptcy and because of this, the state of Michigan took over Belle Isle, but in 2014, the island became Michigan’s 102nd State Park. This move brought a resurgence of maintenance, restoration and building to beloved Belle Isle. When in the area stop by for a visit to this Michigan hidden gem or better yet, make it your destination.