The 1900s was an era of remarkable change. It saw the world at war, mankind landing on the moon, and the creation of the Internet. Events like those forever changed the world, and certainly impacted Michigan’s key economic contributors. Lumber, copper, and iron, which were kings in the 1800s, became increasingly less significant. Trains, which were critical to growth and prosperity in the previous century, gave way to trucks.

By the end of the 20th century, the state’s population had grown to about 10 million people. Much of that growth was actually brought on by the vehicle pioneers who had shaped the early part of the century. These entrepreneurs forged into production of the automobile, by capitalizing on the state’s existing machine tool and coach-building industry. Prior to 1930 there were well over a hundred different carmakers operating in the state from Alpena to Ypsilanti, Detroit to Grand Rapids, Kalamazoo to Menominee, and many places in between. Very few would survive, but they all helped to build the state’s largest industry.

In Detroit, Ransom E. Olds created the modern assembly line and built the first mass-produced automobile, the Oldsmobile Curved Dash in 1901. By 1909, Henry Ford perfected the concept chiefly by adding a conveyor belt. He introduced the moving assembly line at the Highland Park Ford Plant on October 7, 1913 for production of his Model T. It reduced the time needed to build a car down to just 93 minutes. The resulting productivity gains and price cuts led manufacturers of every type to adopt the method.

Meanwhile, in Flint, William C. Durant, who had become a leading manufacturer of horse-drawn vehicles in the city, made his foray into the automotive industry in 1904 by purchasing the fledgling Buick Motor Company. He was just getting started. On September 16, 1908, the General Motors Company (GM) was formed as a holding company controlled by Durant. GM acquired Oldsmobile later that year, and added Cadillac, Elmore, Oakland, Reliance Motor Truck, Rapid Motor Vehicle Company, and others in 1909. Several different brands would be produced under the GM umbrella.

Over at Ford, workers disliked the new assembly line methods so much that by late 1913, labor turnover was a whopping 380 percent. Something needed to be done, so the company announced it would pay $5 for an eight-hour day compared to the previous rate of $2.34 for a nine-hour day. Thousands of would-be workers migrated to Detroit. The high wages, not only stemmed Ford’s turnover problem, but they helped to create an America in which the workers could afford to buy the cars they built.

After a rough go during the Great Depression, Michigan’s auto companies would once again take center stage during the 1940s, but not for building cars. World War II left the country with a desperate need for equipment to defend itself and its allies. It is generally agreed that no American city contributed more to the Allied powers during WWII than Detroit.

The city became known as The Arsenal of Democracy after a fireside chat conducted by President Franklin D. Roosevelt, in which he implored Americans to support the war effort by providing the tools needed. Factories halted the production of automobiles for civilian use and began rapidly producing jeeps, M-5 tanks, and B-24 bombers. Within the first year and a half following the attack on Pearl Harbor, 350,000 workers moved to Detroit to join in the war effort. Women were also hired for factory labor, prompting the legendary marketing campaign of Rosie the Riveter. By the summer of 1944, Ford’s Willow Run plant cranked out one bomber an hour. 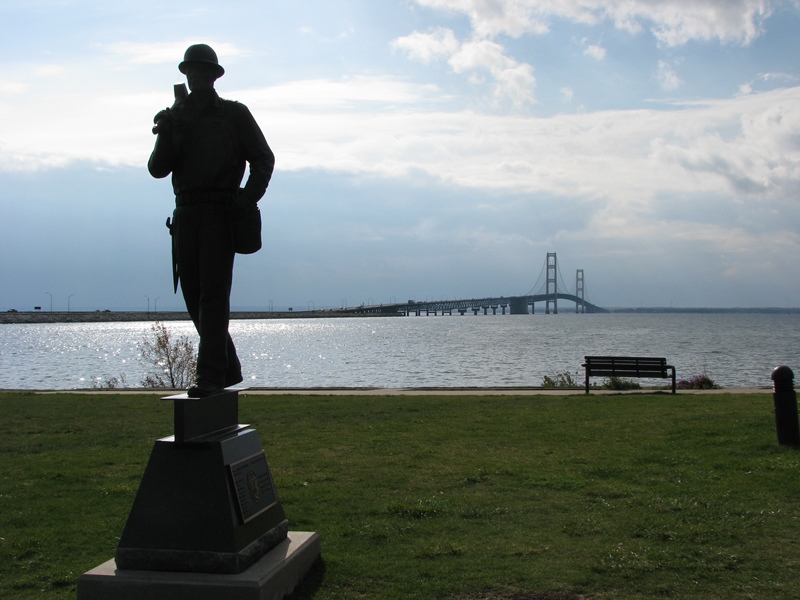 While World War II had factories working overtime, it virtually put a stop to one significant project. Despite desperate need, funding limitations postponed the effort to build a bridge connecting the Upper and Lower Peninsulas. At that time, while it’s hard to imagine now, travel between them was only possible for passengers by ferry. At long last, on November 1, 1957, the glorious Mackinac Bridge opened. Tragically, five workers lost their lives during the construction of the engineering marvel, which took a little over three years to complete. Mighty Mac represented a significant step forward for tourism and commerce in the Upper Peninsula.

By the time the 60s rolled around, Detroit would become known for two more significant things. The first, of which, was the incredible Motown Sound. Barry Gordy’s Detroit-based record labels had songs all over the charts and introduced the world to artists like Smokey Robinson, Diana Ross, Marvin Gaye, and Stevie Wonder.

The second notable issue was what became known as the 12th Street Riot. Racial tension was commonplace in cities across America throughout the decade. In Detroit, what started as a police raid of an unlicensed, after-hours bar on Sunday, July, 23, 1967, turned into one of the deadliest and most destructive riots in the nation’s history.

To help end the disturbance, Governor George W. Romney ordered the Michigan Army National Guard into Detroit, and President Lyndon B. Johnson sent in the United States Army’s 82nd and 101st Airborne Divisions. The result was 43 dead, 1,189 injured, over 7,200 arrests, with more than 2,000 buildings destroyed. The impact on the city would be felt for decades. The population, which had boomed during Ford’s $5 a day offer, began to steadily decline as people moved to the suburbs.

Population decline would continue to be an issue, for the entire state. The automotive industry, which was a driving force for nearly every aspect of the state’s economy, began to suffer. As more and more layoffs occurred, or plants closed, other industries also felt the pain. By the end of the century, for the first time in the state’s history, population actually declined. Thankfully, there were some industries still leading the way, economically.

Food and Beverage
For centuries agriculture had been a fundamental economic staple in Michigan, which is the second most agriculturally diverse state in the nation. Utilizing local commodities as ingredients, the 1900s prompted a surge in food production as well. Long-standing brands like Kellogg’s, Gerber, Faygo, Better Made, Jiffy, and Kilwin’s got their start in the first half of the century. The end of the century brought on a boom of wine and beer production. A state that was once home to two wineries, fostered more than a hundred by 1999. Stroh’s and Goebel survived prohibition, but would eventually fade away in the shadow of craft brewers like Bell’s and Founders.

Manufacturing
Automotive manufacturing dominated the state throughout the century. Not only through Ford, GM, and Chrysler, but with the dozens of parts manufacturers that supported the Big 3. The 1900s also brought about furniture powerhouses like Haworth, La-Z-Boy, and Steelcase. Medical device manufacturer, Stryker, and appliance maker, Whirlpool, also came onto the scene in the 20th century.

Tourism
This fledgling industry grew to be one of the largest in the state during the 1900s. Travel to places like Mackinac Island’s Grand Hotel were once a luxury few could afford, but the automotive industry helped to change that. The prevalence of cars made for more roads. The union wages and vacation time made it possible for middle class Michiganders to travel throughout the state.  In 1929, the first out of state office to promote Michigan tourism opened in Chicago, followed by the very first highway travel information center in 1935. In the 1970s and 1980s the state launched a relatively popular Say Yes! to Michigan campaign that helped draw tourists from elsewhere in the country.