The chugging and mournful sound of a train’s bellow can elicit feelings of contentment in your soul. Even today, when a train is used mainly to haul freight or for scenic, vintage rides, it is a hauntingly beautiful sight to behold. It has also created many a ferroequinologist (train enthusiast). The railroads have been integral in Michigan’s history, moving iron ore and timber products in the early years and hauling automotive parts and other merchandise even today. The population, as well as commercial and industrial growth of the Wolverine state bloomed due to the railroads. Today, we might see rail travel as something fun and amusing, but its history is quite intricate, as is the history of the railways and the companies that built and ran them.

Railroads in Michigan date back to before we were even a state. The first railway, the Pontiac and Detroit Railway was the first charter granted in the Northwest Territory. The goal was to cross the entire Lower Peninsula and make a connection with Lake Michigan at the St. Joseph River. However, by 1833, neither of these projects had made any progress. As a result, the Michigan Territorial Council granted a charter to the Erie and Kalamazoo Railroad (E&K) on April 22 of that year. This was the first successful line in the state and it connected Adrian (accessing the Kalamazoo River) with Port Lawrence, Ohio (now Toledo). The E&K began by using horse-drawn passenger cars on October 1, 1836. The horses pulled a solitary car along the tracks, and a year later, they were able to switch to a steam-powered operation. This railroad worked well with the local businesses that used them most and helped build their prosperity but, it was still considered inadequate.

Because of this, the new state government, led by Boy Governor Stevens T. Mason, embarked on an aspiring project to build three railroad lines across the entire state, from the east to Lake Michigan. The Northern line would be built from St. Claire to Grand Haven. The Central line would go from Detroit to St. Joseph which would connect with the Detroit and Pontiac Railroad (D&P) in Detroit. The Southern line would start in Monroe and go to New Buffalo where it would connect with the E&K near Adrian. The plan was to finance this through a five-million-dollar loan.

Unfortunately for the Michigan railroad project, the state was trying to secure the loan around the same time as the economic Panic of 1837. During this time, banks across the country failed, land sales dried up, and money was hard to come by, no matter where you were. Not only that, the project ran into competition between local interests who all wanted to benefit from the construction. There was an investigation into those managing the project, and problems were discovered. Graft (using a politician’s authority for personal gain), extravagance and general inefficiency was found. The lines were not making adequate progress and the state’s finances were in chaos. In 1846, the state legislature sold both the Southern and Central lines to private investors. The state did this at a loss, but the Michigan Southern and Michigan Central railroads were born. In 1850, it is noted that Michigan’s revised constitution explicitly forbade “direct investment in or construction of any work of internal improvement,” which meant from here on out, building the railroad would be on the shoulders of private companies.

The D&P continued its work further North completing the line from Detroit to Royal Oak in 1838, with horse-drawn operations. It continued moving the line toward Pontiac, but financial difficulties and government entanglements again complicated things. Finally, in 1843, the rails reached Pontiac, but both the government and its citizens were dissatisfied with the beginnings of Michigan’s railroad network. Only five of the now twenty-three companies who had been granted charters in the first seven years of railroading in the state were able to complete and open lines.

When these private companies bought the Central and Southern lines, their contracts stated that the lines would be completed on the coast of Lake Michigan. At the time, the Michigan Central was halted at Kalamazoo and the Michigan Southern was at Hillsdale, both still far from their destinations. The companies realized the growing importance of Chicago, and began to build in that direction. The Central changed direction towards New Buffalo and the Southern bypassed Lake Michigan and dropped south into Indiana, after negotiating with that state’s government. On February 20, 1852, the Michigan Southern Railway became the first Michigan company to run trains into Chicago. Michigan Central joined them three month later. Both companies had agreements with other railroad companies in order to complete their lines. 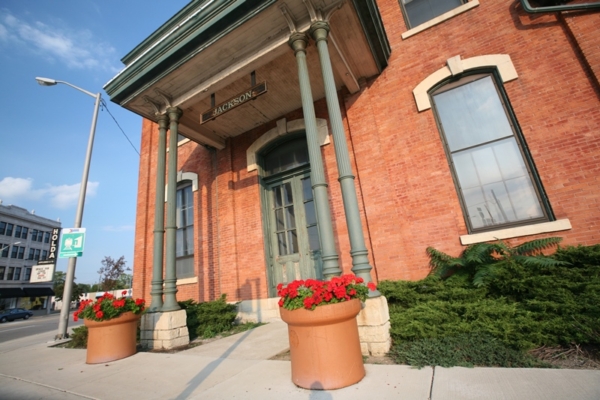 The Michigan Central continued building track. Before its Chicago achievements, in 1841, the company added the growing community of Jackson as its eastern terminus. Jackson was desirable because of its central location in the state. By 1871, the city had six different railroads passing through and was recognized as an important rail center. By 1910, Jackson had switching and repair headquarters for 10 different railroads. Rail travel in Michigan had definitely grown.

The third major railroad in Michigan was not having as good of luck. The D&P railroad emerged from bankruptcy in 1849, with new financial backers and capital. It changed its name to The Detroit and Milwaukee and pushed across the central part of the Lower Peninsula. On November 22, 1858, it reached Grand Haven, by way of Grand Rapids, linking Detroit to Lake Michigan.

Under an 1856 federal land grant program, a railroad boom in Michigan was about to begin. The state was gifted over 5,000,000 acres of land which could be given to the railroads in exchange for constructing certain routes. Strangely enough, much of this land was re-sold by the state for profit, but the proposed lines would cover several gaps in the railroad network. Even better, half of the land grants would go to build railroads in the Upper Peninsula. Substantial mineral resources had been discovered there, and the potential earnings were enormous. Other routes to be built with the land grant money would run north to south and would bisect the existing routes. Even with the money from the government and private investors, construction was difficult. Capital still needed to be raised, and again politics played a role in the problems.

In the Upper Peninsula, the building of railways revolved around the need to move copper and iron ore from the western mountain ranges down to Chicago, either on Lake Michigan or through Wisconsin. The first U.P. railroad, the Iron Mountain Railroad, had been organized between 1851 and 1857. Before the land grant money came through, so much track had already been laid. In the eastern part of the state, the Detroit, Mackinac and Marquette Railroad completed a line from Marquette to St. Ignace, essentially linking the state’s two peninsulas. The Detroit and Mackinac Railway provided ferry service across the Straits of Mackinac. The D&M also connected with rails in Duluth, South Shore and Atlantic at St. Ignace, linking Michigan to other industrial cities.

The decades after the U.S. Civil War saw an immense expansion of Michigan’s railroad network. In 1856, the state had 1,000 miles of track, but by 1890, it had nine times that much. The new lines were built by private companies which were financed by borrowed money, stock sales and at times, from local governments. This time period is known as southern Michigan’s railroad mania, as many lines were built without thorough research by the companies. Some of the lines did not yield nearly as much profit as expected, which resulted in many bankruptcies.

The state is also not without its innovators in the train world. Ephriam Shay was born in Ohio, but moved to Michigan when he was 22 years old. In 1873, he moved his family to Haring, Michigan. Once there, Shay established a general store and sawmill there, then had the idea to use a locomotive to haul logs. He experimented with using maple strips on pine rails, to build rapid paths for a locomotive to travel in the forests, and developed the Shay locomotive. The first prototype was built in 1877. It became the most widely used geared steam locomotive and by the late 1890s, Shay Locomotives were shipped around the world. Shay was credited with popularizing the concept of a geared steam locomotive. Also in 1877, Winfield Scott Gerrish revolutionized lumbering in Michigan by building a seven-mile-long logging railroad from Lake George to the Muskegon River in Clare county. Michigan has always been credited with many innovators, and this is certainly true in the railroading world but that’s another story.

Because of the popularity of the automobile, the state has lost much of its dependence on railways. It has lost fifty-nine percent of its rail infrastructure since the 1920s, and more than 5,000 miles since the 1836 line went in. Today, the vast majority of Michigan rail service is freight, though we do have many Amtrack stations and services.  Michigan also has railroad museums and scenic excursion trains. Spend a day at one of these fantastic travel destinations like the Henry Ford Museum in Dearborn, the Michigan Transit Museum in Mt. Clemens, and the Huckleberry Railroad in Genesee Township, as well as those beautiful old railroad depots in many small towns throughout Michigan. Some people do lighthouse tours and I do love to see all of Michigan’s lighthouses but I propose we start Depot Station Tours. What a wonderful excuse to travel around our beautiful state in search of that haunting lone train whistle.