With attention frequently focused on the capitol, the convention center area, or Spartan country, the quaint neighborhood of Lansing known as “Old Town” is sometimes overlooked. In fact it was, for several years, but is now enjoying a rebirth thanks to unique businesses like Old Town General Store.

Shop owner, Rhea Van Atta grew up in the area, and bore witness to the changes over the years. “I grew up on the north side of town, and watched the area decline and revitalize. I always wanted to open a store here, and coming back when we did was really good timing,” said Van Atta.

After all, what old town would be worth its salt without a general store? While it may be not be stocked with the penny candy and giant flour sacks of yesteryear, the Old Town General Store is definitely worth a stop.

At first glance, it may appear as if you’ve merely entered a small grocery store, but upon closer examination it becomes clear that the foods aren’t simply staples to make this an easier stop than a big box market, this is a showcase of some of Michigan’s finest. 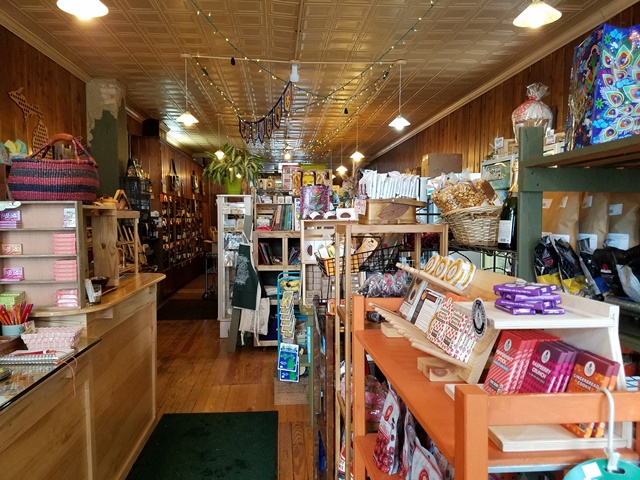 According to Van Atta, the shop was originally opened in 2013, because the Old Town neighborhood needed a place for people to buy groceries, but as time went on, it became a little more gourmet, and definitely has a buy local emphasis.

“I felt it was important to include a lot of local products to help spur up the economy in Michigan,” said Van Atta. “Also, I had a lot of friends who were entrepreneurs who had products that were worthy of selling,” she added.

Aside from bring a great place to fill one’s pantry with local goods, this shop is also home to an interesting array of products designed to showcase what the state is all about. Tou won’t find an oven mitt made in China with the state of Michigan printed on it, but rather locally-produced kitchen tools, home décor, magnets, glassware, puzzles, and even Euchre sets.

Van Atta cautiously estimates that at least 75% of what she stocks is made in the Great Lakes State. All of the items are hand-picked—some as a result of shopping around, but most from vendors who seek out the store.

For an extra does of fun, plan to visit on a Thursday between June and September when Old Town General Store partners with Music is the Foundation to offer live entertainment in its courtyard. Attendees pay a modest coverage charge of $15, or $9 for students, to benefit the performers and the nonprofit. The 2019 Concerts in the Courtyard schedule is now available online.

While in Old Town, there are a plethora of other that may merit your attention. Great Lakes Artworks features handcrafted artistry from more than 30 Lansing artists. Preuss Pets is a family-owned wonderland for animal lovers, while Elderly Instruments is a haven for music lovers. There are also numerous boutiques and galleries to peruse.

All that shopping can work up an appetite, so luckily there is no shortage of eateries, with flavors from around the globe. The friendly folks at Pablo’s serve up authentic Mexican comida. You’ll find delicious Thai at the aptly named Thailand, Cajun-inspired delights at The Creole, and good old fashioned Americana at Meat Southern BBQ. Then quench your thirst at nearby Ozone’s.

While it has undoubtedly taken a lot of hard work, it’s easy to see why many neighborhoods like this are seeing a renaissance across the state. “Old Town is a good welcoming place for any kind of individual. It’s interesting, it’s artsy, it’s friendly,” says Van Atta.