Most Michigan tourist towns have a frontier history, and Traverse City is no different. The Cherry Capital of the World is young compared to other Michigan cities, like Mackinaw, Detroit and Grand Rapids, but it still holds a rich history. I recently brought my eighth grade students to the city for a field trip and was reminded of just how interesting the city is.

The land where Traverse City now sits had originally been settled by the Ojibwe, Ottawa and Potawatomi tribes before any European or American settlers. They called the land Kitchiwikwedongsong or “at the head of the bay.” French voyageurs made the crossing across the mouth of the Grand Traverse Bay, and like most other northern Michigan land, it was controlled by the French, then the British, and then the United States after 1776. 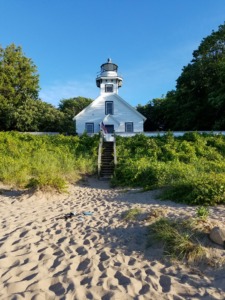 The first permanent settlement on Grand Traverse Bay was the Old Mission, eighteen miles north of what is now Traverse City. The Reverend Peter Dougherty was sent to the Grand Traverse Region in 1836 by the Presbyterian Board of Foreign Missions to establish a church and school for the Native Americans who inhabited the area. In June of that year, Chief Ahgosa of the Grand Traverse Band of Ottawa and Chippewa Indians asked Dougherty to move his initial mission site from the mouth of the Elk River in Elk Rapids to the present day site of Old Mission. The mission was established under the terms of the Treaty of 1836, or Treaty of Washington, and the federal government paid the Presbyterian Board of Mission $3,000 per year to maintain the mission.

Captain Harris Boardman was the first settler of what is now Traverse City. The captain was also a businessman who purchased land at the mouth of the Boardman River in 1847, which at the time was known as the Ottawa River. When Boardman arrived on his ship, Lady of the Lake, he noted that the setting would be conducive to a sawmill. He, his son Horace, and his crew built a house and that sawmill at the mouth of the river. Four years later, he decided to move on and sold the mill to Hannah, Lay and Co. A new era of Traverse City was about to begin under a man now commonly referred to as the Founding Father of Traverse City, Perry Hannah, and his partners, Albert Tracy Lay and James Morgan. The owners made several improvements in the mill, which led to many more settlers moving into the community. The settlement would continue to grow from there on.

Now any history of Traverse City would be incomplete without some background on Perry Hannah. Perry Hannah was born in 1824 in Erie County, Pennsylvania, the son of E. L. and Ann Hannah. In 1837 the Hannahs moved to St. Clair County, Michigan, and Perry was employed in rafting logs from Port Huron to Detroit. He was later employed in a Port Huron store, but in 1846 moved to Chicago to clerk at a lumberyard. In 1850, he formed a partnership with A. Tracy Lay and James Morgan, called Hannah, Lay, and Co. and as you now know, in 1851, the firm purchased the land near Traverse City and began logging.

In 1852, Albert T. Lay visited Washington DC and approached the United States Postal Office to authorize an office at his new settlement. Prior to this, the nearest Post Office was located at the Old Mission. The settlement at this time was known as Grand Traverse City, but the Post Office Department clerk suggested dropping “Grand” from the name. Mr. Lay agreed and the village took on its new name. Traverse City was on its way and the growth continued.

Two other things happened in 1852. First, Perry Hannah married Ann Amelia Flynn. The couple would later have three children. Second, the first cherry trees were bought and planted on Old Mission Point by Peter Dougherty, yes, the same Presbyterian missionary. Local native farmers had grown other fruit trees in the area but they told Dougherty not to plant cherry. Obviously, he ignored them and much to everyone’s surprise the cherry trees flourished. Soon other orchards were planted all over Northern Michigan. These trees would bring a legacy to the area that continues today.

In 1854 the Hannahs permanently moved to Traverse City, where Perry guided Hannah, Lay, and Co. to immense profits, expanding into banking, milling, real estate, wholesale and retail sales. By 1886, Hannah, Lay and Co. disposed of the lumbering portion of the business and focused on shipbuilding: both sailing and steamships. Hannah would also open a bank and create one of the largest department stores in the north. The Hannah & Lay Mercantile was three stories tall and offered multiple departments for shoppers with a great variety of goods. Customers could browse women’s, men’s and children’s clothing, furniture, dry goods, toys, sporting paraphernalia, shoes and groceries. There was even a hardware department. 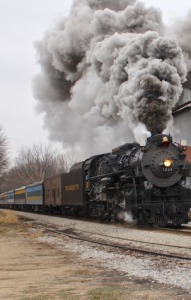 Most cities during this time period would never have grown without the presence of railroads. Rail service came to Traverse City in December of 1872. A Traverse City Railroad Company spur came off the Grand Rapids and Indiana Railroad line at Walton Junction, a community on the line between Grand Traverse County and Wexford County. The rail tracks followed the Boardman River and along Boardman Lake into Traverse City ending at a station along the Grand Traverse Bay. Like the sawmill had done in 1851, the railroad opened the area to even more settlement, as well as industrial development. In 1881, Traverse City was incorporated as a village, which again led to major commercial growth of the town.

In the 1880s, Traverse City was selected to be the site of the Northern Michigan Asylum, with the help of none other than Perry Hannah. It was believed by the founding Medical Superintendent, Dr. James Munson, that fresh air and scenery could help the mentally ill, known at the time as moral treatment. Each patient room had a view of the outside, with a direct supply of light, sunshine and fresh air. By November of 1885, it received its first patients.

At the time of its completion, The Northern Michigan Asylum served 39 counties, including all of the Upper Peninsula, and almost immediately there was demand for additional patient rooms. Starting in the 1890s, standalone cottages were constructed to serve the increasing patient population.

The main goal of the cottages was to provide spaces to separate patients from the larger population based on severity of condition, age or illness. For example, Cottages 19 and 20 were patient infirmaries, or “hospitals within the hospital,” for patients recovering from surgery or contagious diseases.

Dr. Munson and his staff made an effort to ensure that patients felt at home rather than trapped in an unfamiliar place, and many of their methods were revolutionary for the time. Use of physical restraints was forbidden, except for the most extreme patient situations. Meals were served in dining rooms on nice plates and fresh flowers and plants decorated dining tables and resting areas. There was even artwork and inspirational sayings on the walls of the wide hallways.

Unfortunately, changes in the law and mental health care philosophies caused the decline of the institution. The farm on the grounds closed in the 1950s, and most of its buildings were demolished in the mid-1970s. In 1963, the main wing of the main building was destroyed because it was deemed a fire hazard and a new modern building was put up in its place. Use of the hospital slowly declined, and it was closed in 1989.

In 1890, another rail line extended to Traverse City, this one from Baldwin by way of Copemish and Interlochen. The lumber industry was growing at the time, and the railroad primarily serviced these companies. Logs would be transported from the forests of northwest Michigan to sawmills in Traverse City and Manistee. Two years later, even more railroads were extended out of the city, one to the bay in Leelanau County and another extended east into Williamsburg, Charlevoix, and Petoskey. The last was mostly used to accommodate tourists. The area continued to grow, and on May 18, 1895, Traverse City was incorporated as a city. Also by the 1890s, Hannah, Lay, and Co. was worth tens of millions of dollars.

In 1891, the City Opera House was built. It quickly became the pride of the city and hosted plays, lectures, meetings, balls, concerts and vaudeville acts. It was the first building in Traverse City to have electric lights, but sadly in 1920, a local movie house leased the building and shuttered it to eliminate competition. 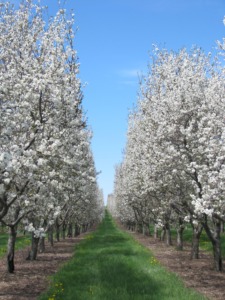 The Twentieth Century brought more growth to Traverse City. In 1925, the first Cherry Festival was held, though it was originally called Blessing of the Blossoms. It was held in the spring to bring tourists to the area during the blooming season. This tradition has continued annually, with the exception of the years during World War II, though the festival is now held in July. During that weekend, the population booms from 15,000 people to 500,000.

Another important event that occurred in 1925 was the building of the city’s first airport. Ransom Field only offered flights to and from Grand Rapids at that time, and later closed in 1936 when the new, larger Traverse City Airport (now known as Cherry Capital Airport) was opened. Ransom Field is now Memorial Gardens Cemetery.

Traverse City is a wonderful place to visit. Magnificent beaches and dunes, hiking canoeing/kayaking and exploring the many trails, wineries and breweries with tours and tasting, beautiful golf courses and great fishing, and the best tasting cherries. Shopping here is abundant and distinct, and you can find some unusual and interesting treasures. In addition, the history of the early years can be found by viewing the many homes built by the lumber barons that still remain open for visits. No matter how much time you have, whether a day trip or for a week or more you will always find visiting this area a special delight.