When people hear the term skyscrapers, they usually think of the Empire State Building or the Willis Tower. These properties shoot up over a thousand feet, and stand out among the majestic skylines of New York City and Chicago. However, the early buildings that were considered skyscrapers, while impressive and beautiful, were only between ten and twenty stories tall. The world’s first was built in Chicago by William LeBaron Jenney in 1885. Just four years later, architect George H. Edbrooke designed and oversaw construction of the Hammond Building in Detroit. Michigan’s first skyscraper, it was completed on February 3, 1889.

The Hammond Building would never have existed if not for the man it was named after. He was a man with an impressive story in his own right. Meat (yes meat) shipping magnate, George H. Hammond was born in Fitchburg, Massachusetts on May 5, 1838. He eventually moved to Detroit in 1854. The aspiring entrepreneur started a mattress factory first, but it burned in 1856. He then married Ellen Barry, the following year, and started a family. The couple would eventually have eight children. Anastasia was born in 1857 followed by George in 1861. Sara came along in 1863, then Charles in 1868. William was born in 1870 and then there was Florence in 1877. Lastly, there was Ethel in 1880 and Edward in 1884.

After a series of failed businesses, Hammond opened a small meat market on the corner of Third and Howard. He bought a refrigerated boxcar patent from fish dealer William Davis. Hammond improved on the invention by lining the interior with horsehair to help keep items colder. He first used this boxcar to move beef from Detroit to markets in Boston in May of 1869, using ice from the Detroit River. It was a success. Hammond began manufacturing the cars down in Indiana, not far from the stockyards of Chicago. His business quickly grew to an operation of 800 cars, and processing 100,000s of cattle every year. With the refrigerated cars, he could ship products all the way to the east coast with no spoilage.

Hammond continued to invest in other endeavors. At one point, he built an oleomargarine factory.  In the mid-1880s, he opened a plant in Omaha, Nebraska. His wealth grew, as he continued to live in a Victorian mansion in Detroit with his family. Hammond simultaneously grew to be an important person in the city. He became the director of the Commercial National Bank and a founder of the Museum of Art. It was in the early 1880s, when he began making plans to build a skyscraper.

Unfortunately, he was unable to complete the project. George Hammond died on December 29, 1886 at the age of 48 of an apparent heart attack. All of his assets went to his wife Ellen. She divested her interests in the meat packing business in 1888 and received over two-million dollars. Her children George, Charles, Florence and Edward all helped in the family business. The company was eventually acquired by the National Packing Company in 1903, but before that, the Hammond Building needed to be erected.

The Skyscraper Monument Is Erected 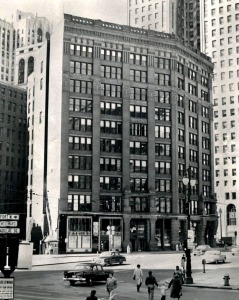 The site of the building had been the home of Detroit postmaster James Abbot. Ellen purchased the property for $350,000 and commissioned the building. She wanted a landmark and memorial to her husband. When Chicago architect George Edbrooke read about Hammond’s plan, he went to Detroit and provided the lowest bid to be chief architect and chief contractor. Chicago builders WA and AE Wells were heavily involved in the project as well.

On March 14, 1889, construction began. The building was made with iron beams and wooden joists, and the exterior was red-pressed face brick. The floors were oak in the offices and marble in the corridors. It was ten stories high with stores on the ground floor and 246 commercial offices located on the other floors. Many of the tenants moved in before the interior work was even done. The building was tall enough and well-enough placed that the National Weather Bureau used the roof to signal ships in the Detroit River to warn of storm conditions.

It wasn’t always a smooth project and ran into issues, as most projects of this magnitude do. Construction was halted several times as there was an insufficient quantity of mules, which were imperative to the project. Edbrooke was also not paid in full at the end of the project because of defective work by the plasterers, steam-fitters, and carpenters. He in turn didn’t pay some subcontractors as a result. At the time it was finished, it was the tallest building in Michigan, and one of the largest masonry buildings ever built in the United States.

There are some interesting stories about the building when it was in use. In 1890, all of the offices were illuminated with Edison incandescent bulbs to honor the Detroit International Exposition. Gas was also used to light the building. At this time, offices were opened for tours and many came to look at the building. The excitement was obvious, and many people came from all over Michigan just to see their first skyscraper

Another interesting story happened in February of 1906. Fifty-five-year-old night watchman William Urquhart thought an open elevator door was a regular open door in the darkness. He fell down the elevator shaft from the first floor to the basement and suffered from a broken arm and leg, as well as internal injuries. The Detroit Free Press reported the fall to be fatal at first, but he did survive.

Tenants of the Hammond Building varied over the years, from the US Department of Agriculture to the Dime Savings Bank to general contractor JA Mercier. Even the Detroit Tigers had an office for a while. They would fly a flag from the roof to signal if the team had a game that day.

Unfortunately, the building failed to maintain its profitability. In 1944, it was only marginally profitable, and as Detroit grew, more modern high-rise buildings had been built. The Hammond Building Company dissolved on February 15, 1956, and it was decided that the building was no longer sustainable. The National Bank of Detroit obtained the property for their 12-million-dollar headquarters, and demolition of the building began on August 17, 1956. After several mergers, the bank and its new building were purchased by JP Morgan Chase & Co. in 2004. It was renamed Chase Tower. Today, the building is owned by Dan Gilbert, most known for founding Quicken Loans. This new building is known as the Qube, and while some people may think it looks unique and stylish, I much prefer the simple beauty of the red brick.

George H. Hammond may not have created refrigerator cars, but he pioneered the ability to make refrigerated rail transport practical and popularized it. Like many other Detroiters, he used this innovation to change the world and make a name for himself. While the Hammond Building may no longer stand, its namesake is still a very important person in Michigan, and especially Detroit, history.