5 scrumptious ways to drink your apples

It’s apple harvesting season, and there’s nothing quite like biting into one of these sweet, crispy fruits of fall. That is of course, unless you take advantage of one of the many other scrumptious ways to drink in all that flavor. About half of the more than 20 million Michigan apples harvested each year, are processed into other products, many of which end up in a glass or mug. Most of us are familiar with them, but don’t necessarily know how to distinguish between them.

Cider
Most Michiganders think of fall as being synonymous with cider. At this time of year we can find the caramel-colored product in plastic jugs in nearly every market, and of course, best of all, at cider mills all around the state. Fresh cider is raw apple juice that hasn’t been filtered. The pulp remains in the product, typically giving it a darker color than filtered juice.

Cider needs constant refrigeration because it is perishable. On average, it will stay sweet and unfermented for up to two weeks. Nutritionally, it is very similar to apple juice, except that it may have up to five times as many polyphenols, a family of antioxidants that have been associated with health benefits ranging from a reduced risk of cancer to improved brain functions. One cautionary note is that often cider, especially directly from a mill, is not pasteurized. Pasteurization is a process that kills potentially harmful bacteria. For most people, this is of little consequence, but for people struggling with compromised immune systems due to illnesses like cancer, diabetes, or AIDS, it is best to stick with a pasteurized product. Infants, small children, elderly, and pregnant women may also want to exercise caution, as they are at more serious risk for food-borne illnesses. It is also worth noting that in most other countries asking for “cider” will be interpreted as a request for an alcoholic version of the drink, more commonly known in the States as “hard cider.”

Apple Juice
For most of us, apple juice provides our first introduction to drinking the fruit’s nectar. You can find it in cans, bottles, and boxes in almost any grocery store all year round. Generally, it contains the same amount of calories, natural sugar and vitamins, as its cider counterpart, though some juices like Indian Summer have been enhanced with vitamin C. It has been filtered to remove the pulp, and pasteurized so that it will stay fresh longer. The result is often a lighter texture and color. Vacuum-sealing and additional filtering extend the shelf life of the product. Unopened containers of apple juice can last for two or three months. 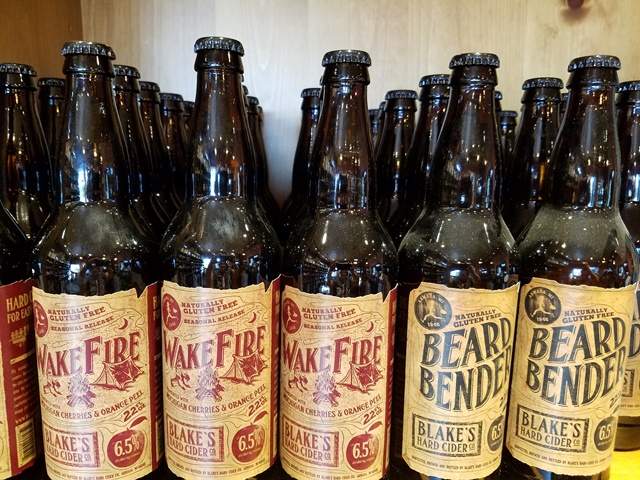 Hard Cider
Sometimes found on tap in a pub, as well as in bottles and cans, hard cider contains alcohol. It is essentially apple cider that has been allowed to ferment to an alcohol level that runs somewhere around 3% to 6%. Because of the reasonably low alcohol content, color, availability on tap, and marketing, many people think of it as being part of the beer family. Conversely it is actually considered to be more a part of the wine family since it is fermented, rather than brewed, and derived from fruit.

Apple Wine
This is a hard apple juice as well, but it is much higher in alcohol. It is juice from apples that has gone through approximately the same process as making wine from grapes. The acidity is adjusted, nutrients are used, and, it is bottled and aged. Most significant is the addition of sugar to the fermentation, which brings up the final alcohol level to that of wine. Most are around 10% to 12%. Examples include: Farm Market Apple by Round Barn, Cascade Cellars Apple Wine by Peninsula Cellars, or Apple by Glass Creek Winery–a Gold Medal winner in this year’s Michigan Wine Competition.

Apple Brandy
Apple brandy is distilled apple wine or cider that is typically, though not always, barrel-aged. It is mostly enjoyed from a snifter as an after dinner drink, but can also be used to create cocktails, in food recipes, and especially for flambéing. Its history stretches back to the 1600s, when colonists were cultivating apple orchards throughout the Northeast and producing hard cider. Applying European distilling practices, they began to age the cider in wooden barrels. The resulting product has an alcohol content of around 40%. Examples include: A&G Apple Brandy by St Julian, Spirit of the Apple by Black Star Farms, and Applejack by Coppercraft.

They say an apple a day will keep the doctor away. That may not be exactly true, but if it’s nutrition you want, it’s worth noting that none of these options will beat the the vitamins, antooxidents, and fiber one gets from simply eating an apple. However, if it’s sheer enjoyment you’re after, pouring apple juice, in one of these many forms, into a glass, is likely to be a delight to your taste buds.