Bless you boys: a history of the Detroit Tigers

April. It is officially spring, and there is much going on in the world of sports. In hockey, the Stanley Cup Playoffs begin, as do the NBA playoffs, and of course one NCAA basketball team will experience ‘One Shining Moment’ on April 8 and become National Champions. However, if you’re like me, when I think of sports and April, I think baseball! And there are few baseball teams in the world with as rich a history as Michigan’s own Detroit Tigers.

To discuss the history of the Tigers, one must first know a little bit about the history of baseball in general. While many people believe the game was invented around 1839 in Cooperstown, New York by future Civil War hero Abner Doubleday, the history of baseball goes much deeper than that. It really evolved from two English games: rounders and cricket. Many variations of these games developed in schoolyards across early America. In September of 1845, a group of men from New York City founded the New York Knickerbocker Baseball Club, and volunteer firefighter and bank clerk Alexander Joy Cartwright would formalize a new set of rules. These rules would be the basis for what we now know as modern baseball.

In the mid-1850’s, a baseball craze hit New York City, and a year later, sixteen area clubs formed the sport’s first governing body, the National Association of Baseball Players. The game grew in popularity during the Civil War, especially among the camps, and in 1869, the Cincinnati Red Stockings formed the first fully professional baseball club.

The Tigers franchise goes as far back as 1896 when they joined the Western League. The team owner, George Vanderbeck had a park built for his team a year later, known as Bennett Park. This became the home of the Tigers for the next 104 seasons, though it was rebuilt and changed names several times, eventually becoming the beloved Tiger Stadium.

The Tigers won their first game, an exhibition, on April 13 against a local semi-pro team called the Athletics, with a score of 30-3. Their first Western League game was also a victory on April 28, against the Columbus Senators, 17-2.

The Western League was renamed the American League for the 1900 season and the following year it became a major league, competing with the National League for players, as well as fans in Chicago, New York , Boston, Philadelphia and St. Louis. Each of these cities now hosted a team from both of the professional leagues. There were disputes between the two leagues at first, but by 1903, the leagues signed an agreement, recognizing each other and playing a championship game and the World Series was born. In 1903, the American League Champion, Boston Americans were matched against the Pittsburgh Pirates of the National League. In the best of 9 game series, Boston prevailed, winning 5 games to 3, even though they entered Game 5 down 3 games to one.

The Detroit Tigers first game as a major league team was at home against the Milwaukee Brewers. The Tigers entered the bottom of the 9th inning down 4-13. However, as fans of the Tigers know, they can end their games in dramatic fashion. This was the case in their very first game as the home team came back to win, 14-13. That year, they finished in third place among eight teams. 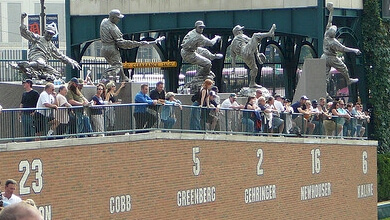 The Tigers have had many great teams through the decades, and countless all-star players. The seasons between 1905-1926 are now known as the ‘Cobb Era’ after Tyrus Raymond Cobb, one of the greatest players of all time. Behind Cobb and his talented teammates, Sam Crawford, Hughie Jennings, Bill Donovan, and Ed Killian, the Tigers won the American League in 1907, 1908 and 1909, but did not win the World Series. When Cobb retired after 22 years with the Tigers, they built a solid franchise foundation, though they had unimpressive records.

In 1934, they came back with another American League pennant, but fell to the St. Louis Cardinals in Game 7 of the World Series. The following season, the Tigers once again made it to the World Series, this time reigning victorious over the Chicago Cubs in six games.

1940 was the next season that the Tigers won the American League, however this year, they were defeated by the Cincinnati Reds in Game 7 of the World Series. Unfortunately the following season, major players like Hank Greenburg changed their baseball uniforms to army uniforms to fight for America in World War II. As a result, the Tigers faced some disappointing years, but in 1945, they came back with another World Series victory, this time over the Chicago Cubs.

Throughout the 1946-1950 seasons, the Tigers held winning records, but never won the American League and between 1951 and 1960, they had less than stellar seasons, but the 1953 season brought another Tiger great to Detroit: Albert William “Al” Kaline. In the 1955 season, the talented right fielder hit .340 and became the youngest-ever batting champion in league history at the age of 20.

In the 1960’s, a strong base developed in Detroit. Integration of the Major League brought standout players like Bill Bruton, Willie Horton, Earl Wilson and Gates Brown to the team. The Tigers repeatedly posted winning records during this decade, with pitchers Mickey Lolich and Denny McLain, and other stars like “Stormin” Norman Cash, Al Kaline and Jim Northrup. With this core of players, the Tigers won the American League in 1968 and headed to the World Series to battle the defending champions, the St. Louis Cardinals. The series went to Game 7, in St. Louis, after Detroit battled back from a 1-3 series deficit. They won that final game 4-1.  World Series champs once again!

In the 1969 season, the league expanded and realigned the leagues into two divisions. The Tigers were put in the East, and at the end of the season, lost the American League Championship Series to the West Division champion, Oakland Athletics in 1972.

The Tigers had less than successful seasons between 1973-1978, though there were glimpses of a more successful future in the franchise. 1976 became known as the Year of the Bird, as 21-year-old rookie Mark Fidrych came to the team. A colorful and quirky pitcher, Fidrych was the American League Rookie of the Year, but injuries to his knee and arm drastically limited his 1977 and 1978 seasons. However, talent was coming up through the Tiger’s farm system, players like Jack Morris, Lance Parrish, Alan Trammell and Lou Whitaker, all playing their first Major League Baseball games in 1977.

Also joining the franchise in the late 1970’s was beloved manager George “Sparky” Anderson. The next few years saw the Tigers developing their young talent. The 1984 season began successfully with a 9-0 record (and the birth of a future fan) and ended in a hot finish. The Tigers defeated the Kansas City Royals in the American League Championship Series and faced the San Diego Padres in the World Series. The Tigers won the series in Game 5, due to great offense led by Kirk Gibson, and solid pitching by closer William “Willie” Hernandez. This World Series win made Anderson the first manager to win the World Series in both leagues.

The Tigers had an American League Championship Series appearance in 1987 where they lost to the Minnesota Twins, who eventually went on to win the World Series. After that, however, they hit a low point and between the 1987 and 2005 seasons, including the 2003 season where they posted the most losses in MLB history, the Tigers were not successful.

The 2006 season saw a long-awaited American League Championship, where the Tigers first beat the heavily-favored New York Yankees in the Division Series, then swept the Oakland Athletics in the American League Championship Series. This series was capped off with a walk-off home run by Magglio Ordonez in Game 4. They ended up losing to the St. Louis Cardinals in the World Series.

The Tigers have had many Hall-of-Fame-caliber and fan favorite players come through in the past couple of decades, including Cecil Fielder, Ivan “Pudge” Rodriguez, Magglio Ordonez, Justin Verlander, Curtis Granderson, Ian Kinsler, Brandon Inge, and Jose Iglesias.

The Tigers are once again in “rebuild” mode, developing young talents. They may not post a winning record here in 2019, and it might take a few more seasons to make another World Series, but they have had their ups and downs throughout history, and should be able to come back to form eventually.  They still maintain a rich history, and true fans will find themselves saying “Bless You Boys” starting every year in April.