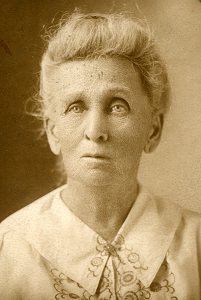 In 1897, Huldah Neal became a deputy game warden for Grand Traverse County. Thereby cementing her little-known legacy as the first female conservation officer in the United States. This is according to press reports of the day.

To recognize her contributions, and in conjunction with Women’s History Month, the Michigan Department of Natural Resources Law Enforcement Division is nominating Neal for induction into the Michigan Women’s Hall of Fame. A panel of judges will decide if she gets in, later this year.

“Huldah Neal was a trailblazer, literally and figuratively,” said Gary Hagler, DNR Law Enforcement Division chief. “She was fearless in the way she performed her dangerous duties, and in how she broke free from typical roles that society forced on women at that time. She paved the way for new generations of women who proudly serve as guardians of our natural resources. Huldah Neal left a positive legacy for our state. On behalf of all conservation officers, it’s a privilege to nominate her for induction to the Michigan Women’s Hall of Fame.”

Huldah Jane Valleau was born around 1855 in Ohio. Eventually she moved with her family to Grand Traverse County in 1861. Soon after, she married Warren Neal in 1872. The couple raised two children on their farm near Long Lake. She shared her husband’s love of the outdoors. That was a passion that was recognized by newspapers reporting on her appointment as deputy game warden.

“Mrs. Neal is a woman of determined character, and has excellent qualifications for such a position,” the Traverse City Record-Eagle wrote on June 6, 1897. “She is an active woods-woman, a good shot, and can give cards and spades to any man in the manipulation of the fishing rod. Besides being an expert in these respects Mrs. Neal is an ardent supporter of the state game and fish laws, and takes much interest in their preservation. The appointment is a good one, and Mrs. Neal will wage an aggressive campaign against violators of the law; and offenders in her locality will find that Mrs. Neal will stand no fooling.”

Neal’s appointment generated statewide and national attention. For example, there was an extensive write-up in the Aug. 15, 1897, Philadelphia Inquirer. “The duties of game warden are of such a nature that many men would not care to undertake to fill the position,” the Inquirer said.

News coverage in that era was quite different than what writers might say today. There were, for example, descriptions of Neal as a “plucky little woman.” Others were shocked that she “wears pantaloons just like those of men and can handle the rifle like a veteran marksman.”

Press accounts also credited Neal for having a tremendous impact on fish and game law violations. “She is energetic and watchful, and already poaching has begun to diminish. The worst gang of law violators have ceased operations,” the Jackson, Michigan, newspaper reported in March 1898.

Dangers of the Job

According to Hagler, Neal faced many of the same risks that confront today’s DNR conservation officers.

“Patrolling remote areas without nearby backup assistance always has been an occupational hazard of being a conservation officer,” Hagler said. “It’s still true today, even with modern vehicles, weapons and communications. The fact that Huldah Neal carried out her duties on horseback, in rowboats and without communications equipment makes her accomplishments even more impressive.”

End of Her Life

In addition to her game warden’s duties, Neal was a community fixture, even delivering mail three times a week to Traverse City. She led a productive life that bettered her community. As a result, she raised the ceiling for women who would follow. Today, Neal rests with her husband in Long Lake Township’s Linwood Cemetery.

Despite Neal’s impressive example, it took 80 years before Michigan hired its next female conservation officer. Marquette native Kathryn Bezotte carried on the tradition in the modern era. She began her duties in 1977. Today, nearly 20 women patrol Michigan’s woods and waters as conservation officers.

Neal and Bezotte were both pioneers in their own right. Neal was the first conservation officer, while Bezotte picked up her torch. They opened the door for subsequent generations of women who have served their state by earning the right to wear the badge and uniform of a Michigan conservation officer.