How a Michigan man became a WWII veteran of two countries 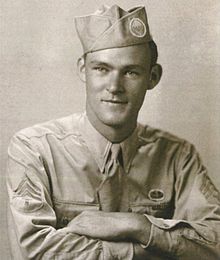 With this being the month of November, I thought it appropriate to write an article about a hometown veteran. To me, the story of Joseph Beyrle is made for Hollywood. Joe was an American soldier who was given accolades by both the United States and the Soviet Union. He was a hero who deserves to have his story told.

Joe Beyrle was eighteen when the Japanese bombed Pearl Harbor and officially pulled the United States into the Second World War. After graduating from St. Joseph High School in Muskegon, Michigan, he had a decision to make, accept a baseball scholarship and attend Notre Dame University, or join a branch of the military and fight for his country. He chose the latter, enlisting in the Army and volunteering for the 506th Parachute Infantry Regiment of the 101st Airborne’s “Screaming Eagles”. He specialized in radio communications and demolition.

Joe’s training brought extended marching in the blistering South Carolina heat, runs up the Currahee Mountain, and jump school in both America and Britain. During jump school, he earned the nickname “Jumping Joe,” because he appeared fearless parachuting out of planes. In fact, many of his fellow trainees paid Joe five dollars to make a jump in their name, as they were afraid of spraining an ankle or breaking a shin.

In 1943, Joe found himself in England. He volunteered for a dangerous series of missions, where he would parachute into France with a backpack full of gold coins for the French Resistance. Once he handed off the gold, Joe was moved around constantly by members of the Resistance to escape detection, and 7-10 days later, he would be picked up and brought back to England. He ran this mission multiple times, though he knew if he failed, he would be executed by the enemy.

Then came the invasion of Normandy. The night before D-Day, Joe, and others from the 101st, jumped behind enemy lines. Their objective was to destroy bridges and cut power supply lines to soften the Nazi defenses for the men who would land on Utah Beach. As the men prepared to jump, several planes were hit by enemy fire and explosions filled the air. Joe landed on the roof of a church, the same roof that hid a Nazi sniper who shot at Joe’s parachute the entire time he was descending. He clambered down the roof and became a singular man on a mission.

Alone in France, with no idea where the rest of his unit was, Joe blew up a power substation and ambushed a squad of German infantry by throwing grenades at them. As he moved to blow up a bridge, he stumbled into a Nazi bunker where he was forced to surrender.

After his capture, Joe was marched deeper into France to a temporary Prisoner of War (POW) camp, at which time the entire group was bombed by an unknown attacker. Joe used the distraction to make his escape. He avoided capture for twelve hours, but was apprehended again, thrown into a truck, and brought to another POW camp. Once there, he was interrogated and beaten so severely that he was sent to an infirmary.

Three months of starvation, beatings, interrogations, and being moved to other camps followed. Joe was forced to work during the day, survived bombings from the Allies during the night, and continued to face bad weather, disease, and exhaustion. He was then transferred to a POW camp in Poland where he immediately began planning an escape.

On a frigid November night in 1944, Joe and three other American POW’s cut through barbed wire and escaped South. They crept into a railway station to hop a train, hoping to meet up with the Red Army as it marched through. Alas, they boarded the wrong train and ended up in Berlin. Luckily, they linked up with the German Underground Resistance, a group who tried to help the Allies during the war. Joe and the other soldiers successfully hid for almost a week before the Gestapo found them. Joe was again interrogated, tortured, and even more brutally abused, before he was handed off to the German Army.

Once again confined to a prison in Poland, Joe was punished for his previous escapes. It took months for him to get his strength back, and once he did, he escaped again. Though it was January, Joe had to dive into a frigid river to throw off the trail of German Shepherd dogs that had been sent out to hunt him down. Sadly, three soldiers who escaped with him were gunned down as they neared the river.

Joe finally reached Soviet lines and met up with the First Guards Tank Army, led by Battalion Commander, Alexsandra Samusenko, the only female tank commander of World War II. Joe spoke little Russian, but convinced the army to let him join their unit. He was issued a gun and ammo, and promptly moved with the Russians, assisting them in liberating a POW camp–the same camp from which he had just escaped.

It was a short, bloody fight, and Joe was able to raid the camp office and locate and take his POW photo. He continued to fight with the Soviet Union in Poland where he was wounded in the leg and then sent to the US Embassy in Moscow. Unfortunately, the ambassador did not believe Joe was who he claimed to be, as records showed that Joseph R. Beyrle had been declared killed in action on June 10, 1944. The ambassador believed Joe was a German spy, so he was shipped around Europe until his identity was established. Joe finally returned home on April 11, 1945.

Once back in the United States, he visited with his family, went to Miami Beach for rest and recuperation, and was honorably discharged from the Army due to disabilities. He was also awarded the Purple Heart. He married JoAnne Hollowell on September 14, 1946 in the same church and by the same priest who officiated at his funeral Mass two years earlier when he had been presumed dead.

After the war, Joe worked as a supervisor for the Brunswick Corporation in Muskegon until 1981 and was well-liked by all who knew him. Thankfully Joe had the foresight to write down his memoirs. He died on December 12, 2004, at the age of 81, while visiting his old training grounds in Toccoa, Georgia. Joe is buried at Arlington National Cemetery.

What an amazing legacy this man has, as do so many of our military veterans. Joe Beyrle is truly an American hero. There are so many other details of Joe’s story that I was not able to fit in this article. If you would to learn more, check out the following:

Read:
Joe’s story in his own words: http://old.506infantry.org/stories/beyrle_his.htm
The Simple Sounds of Freedom or Behind Hitler’s Lines by Thomas H. Taylor
Arlington National Cemetery obituary: http://www.arlingtoncemetery.net/jrbeyrle.htm
Honor and Fidelity: The Chronicle of Joe Beyrle: http://militarywiz.tumblr.com/post/113136942944/joe-beyrle-an-american-in-the-red-army
Military History of the Great Lakes account: https://ss.sites.mtu.edu/mhugl/2017/12/08/joseph-beyrle-dual-soldier/