How the Mackinac Bridge was built

I took a drive up to Mackinaw City this past weekend. Along the way I saw numerous signs warning travelers that the Mackinac Bridge would be closed on Labor Day from 6:30am to 12:00 pm for the bridge walk. Not only that, but I was able to cross the bridge four times that weekend. It made me think about not only the bridge walk, and the bridge itself, but also how this magnificent piece of architecture was built. When I began to do some research, I learned there was much more to the creation of the bridge than what I initially thought.

People had been discussing a bridge to span the straits for decades. On February 5, 1884, the Lansing Republican newspaper pointed out that providing year-round service across the straits by boat was a failing endeavor. It was determined that a better option was obviously needed. The success of the Brooklyn bridge in New York made bankers and other investors take note of this possible venture. On July 1, 1888, the Grand Hotel Board of Directors held a meeting to discuss the possibility of a bridge. Cornelius Vanderbilt himself, a sitting board member, stood in support of this endeavor.

Over the next several years, multiple ideas were proposed to solve the problem. At one point, the state highway commissioner proposed a floating tunnel. Meanwhile, C.E. Fowler, an engineer from New York City, suggested a series of bridges and causeways. They would connect Cheboygan to Bois Blanc Island, then to Round Island, then to Mackinac Island, and finally, end in St. Ignace. These ideas were either too costly or not efficient enough. In 1923, the legislature finally ordered the State Highway Department to establish a ferry service. By 1928, traffic was so heavy that the governor, Fred Green, ordered the State Highway Department to study the feasibility of a bridge connecting the two peninsulas. The $30 million estimate was favorable, but the project was dropped because of the big financial crisis that developed.

Determination to Build a Bridge

In 1934, in the midst of the Great Depression, it was suggested that the Public Works Association take on the project. New studies on that possibility started. The Mackinac Straits Bridge Authority of Michigan reached the conclusion that a 2-lane highway and 1-track railway could be built. The War Department of Engineers aided in the study so even president Roosevelt favored the bridge construction. Things looked to be moving forward. Yet, more roadblocks were to come.

The Bridge Authority next attempted to get loans and grants from the Federal Emergency Administration of Public Works. It tried in both 1934 and 1936, but the PWA refused. Bridge backers continued working on a way to get their bridge. From 1936 until 1940, a more direct route was selected. They went so far as to make borings, which involved using a barge to drill the foundation for bridge placement. They also completed a comprehensive study of traffic, geology, ice formations, and water movements. A causeway, or mole, was constructed on the north side, jutting 4,200 feet into the straits. Preliminary plans for the bridge were completed. Thus, the possibility of the bridge became even more real.

Several bridge engineers expressed an interest in heading up the project. L.S. Moiseiff was one of them, and he had a promising resume. He had been the consulting engineer on the Golden Gate Bridge construction in 1937. Moiseiff had also designed the Tacoma Narrows Bridge in 1938. He was a logical choice for the design engineer, but was removed from consideration in 1940. That year the Tacoma Narrows Bridge dramatically collapsed into the waters of Puget Sound. It was determined that the bridge failed when a never-before-seen twisting mode occurred from the wind.

Unfortunately, all of this momentum was halted by World War II. By 1947, the Michigan state legislature abolished the Mackinac Strait Bridge Authority. However, strong supporters of a bridge to connect the peninsulas were not about to give up their quest. They established a committee of citizens to push for legislation to recreate the Bridge Authority. By 1950, they were successful, but the authority was limited to simply determining the feasibility. The Authority was also required to consult with three of the world’s foremost long-span bridge engineers and traffic consultants to get advice. This all being done, they submitted a favorable preliminary report in January 1951. Unfortunately in came another world conflict, this time in Korea, which created a shortage of materials, halting progress yet again. 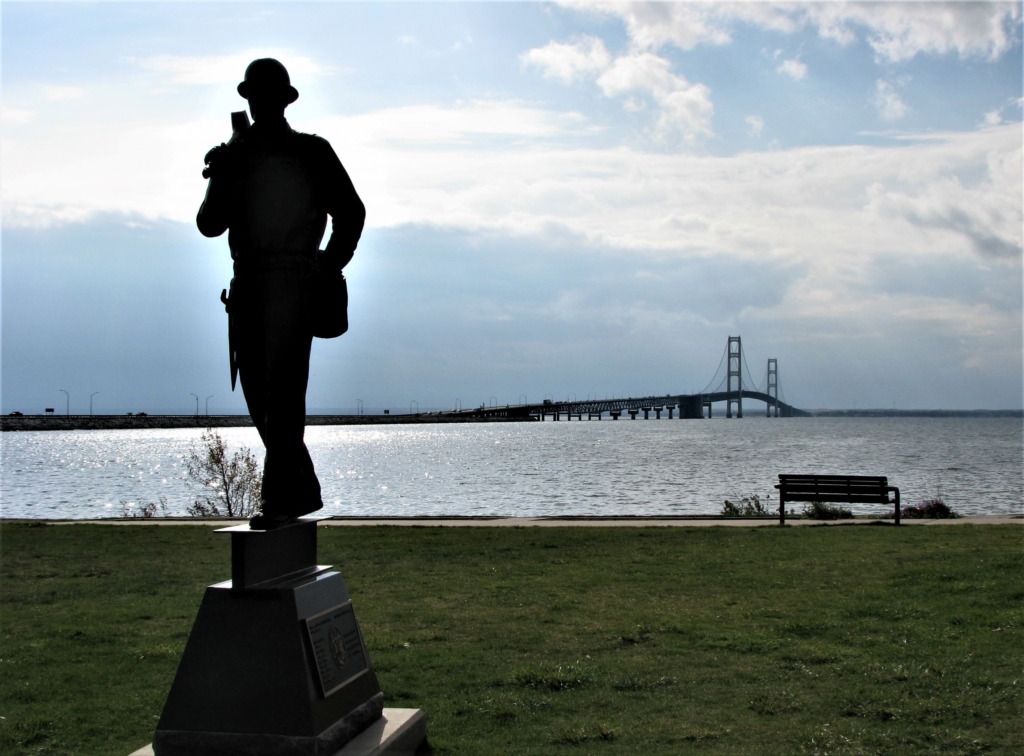 This monument, in the Upper Peninsula, honors the hard work and sacrifice of those who built the Mackinac Bridge.

The Bridge Authority asked the Reconstruction Finance Corporation to purchase $85,000,000 in bonds. While that was being reviewed, a private investment banker offered to manage a group of companies to underwrite the sale of bonds. Unfortunately, the money market had weakened, and investors were hard to come by at first. Toward the end of 1953, the market began to recover so construction of the bridge could move forward. Dr. David B. Steinman was chosen to design the bridge. He had actively pursued the job, and had built notable bridges on five continents. He also had multiple civil engineering awards. Steinman stressed that the Mackinac Bridge needed to be safe and functional, yet also needed to be a beautiful sight.

While reviewing the older plans, it was decided that the railroad on the underdeck of the span would require an anchorage pier in the deepest part of the straits. This wasn’t practical and would have cost a lot of extra money. Steinman had a lot to consider. The water in the straits of Mackinac would freeze in the winter, and icebergs would place stress on the bridge. He did his due diligence however, and gathered all he would need. Steel was prepared. Workers were hired. Finally, after years of planning, the building of the Mackinac bridge began on May 7, 1954. There were 2 days of ceremonies at both St. Ignace and Mackinaw City. Construction of the Mackinac bridge took four long years, since there was no work during the winter for obvious reasons.

Of the 3,500 skilled workers used during this time, five died while on the job. On September 6, 1954, diver Frank Pepper ascended too quickly from his depth of 140 feet. He was rushed to a decompression chamber, but died from the bends. On October 10, 1954, 26-year-old James LeSarge, lost his balance and fell 40 feet into a caisson. He died from a head injury. Next, on October 25, 1954, 40-year-old Albert Abbot died. He fell four feet into the water while walking on a beam. After a review of witness testimony, it is speculated that he died from a heart attack. Lastly, on June 6, 1956, a catwalk collapsed near the north tower. This caused Jack Baker and Robert Koppen to fall into the water. Koppen’s body was never recovered. Sadly for both men, that was their first day on the job.

Opening the Bridge to Traffic

The bridge finally opened to travelers on November 1, 1957, right on schedule. The first car to cross was a 1951 Chevy Styleline Deluxe owned by Albert Carter. The inaugural fee to cross the bridge was $3.25 per vehicle, a pretty steep price for the time period. The completion of the bridge and the celebration that followed is considered to be Michigan’s biggest historical event in 100 years.

The bridge’s formal dedication was the following year on June 25-28, 1958. This was the day Governor G. Mennen Williams began what is now the Labor Day bridge walk tradition. The sixty-eight people walking the five mile span across the bridge that day were the first of thousands that would follow every year afterwards on Labor Day. The record number of walkers was in 1992 when 85,000 people joined President George HW Bush and governor John Engler in the walk.

Since the bridge provides nautical navigation with its lights spanning the straits, it is the reason the Mackinac Point Lighthouse was decommissioned. Other technological advancements include elevators in the towers for workers to ride in for maintenance and four cameras set up so people can watch local weather and traffic from around the world. The bridge closes periodically for wind, falling ice, fog, and, as was the case in July of this year, bomb threats. Of course, it is also closed on Labor Day for that famed 5-mile bridge walk.

Sadly, there have been some deaths, both accidently and purposefully, since the bridge was opened. On September 10, 1978, a small private plane carrying US Marine officers smashed into one of the bridge’s suspension cables while flying in heavy fog. The wings were torn off the plane and it plunged into the straits killing all three men on board. On September 22, 1989, Leslie Ann Pluhar was speeding and lost control of her car, causing it to  jump a guardrail, then fall off the bridge. On March 2, 1997, Richard Alan Daraban drove over the edge of the bridge, an action that was determined to be suicide. Over the years, there have been roughly a dozen confirmed suicides by jumping from the bridge.

Bridge worker Daniel Doyle fell from the scaffolding about 65 feet on August 7, 1997. He survived the actual fall, but could not survive the 50-degree water temperature. His body was recovered the next day in 95 feet of water.

Millions of tourists have come to the Straits area in Michigan for many reasons but one of the best is to see the bridge. I find it difficult not to stop for a view of this magnificent span every time I travel through Mackinac. There are so many different locations to view this beautiful piece of engineering, from the upper and lower peninsula shorelines, and all the islands in the straits area, that you never get tired of the view. If you never have the opportunity to do the famous bridge walk, I hope you can at least make it a destination on your next road trip. You won’t be disappointed!